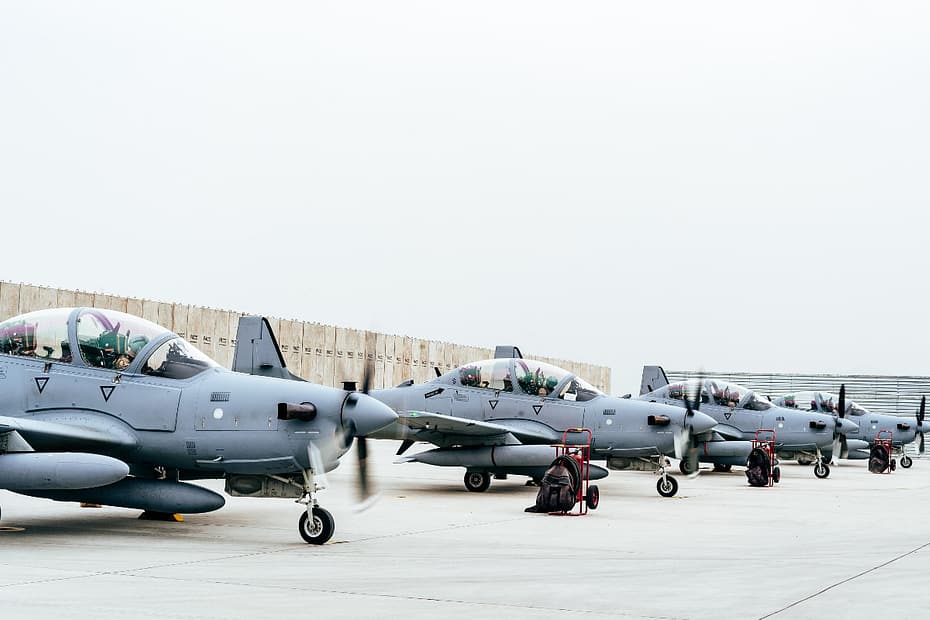 The arrival, last week, of six A-29 Super Tucano fighter jets, the first batch of 12 ordered by the federal government from the United States, raised hopes that the fighter planes would make a difference in the raging war against insurgency and banditry.

But military experts have argued that the long term panacea to security challenges confronting the nation lies with the nation coming together to address the root cause of the problem.

Chief of Defence Staff (CDS), Gen. Lucky Irabor, said last week that the military would not tolerate any form of violence directed at the country’s unity.
The six fighter planes bring to 32 the number of platforms procured by the President Muhammadu Buhari-led administration.

The aircraft ranges from fighter planes to training and support platforms. The expectation by defence and military authorities are that the attack aircrafts would change the tide in the war against insurgency and bring it to an end.

The aircraft “is armed with two wing-mounted 12.7mm machine guns with a rate of fire of 1,100 rounds a minute and is capable of carrying general-purpose bombs and guided air-to-air and air-to-ground missiles.
“A-29s are turboprop planes armed with one 20mm cannon below the fuselage able to shoot 650 rounds per minute, one 12.7mm machine gun (FN Herstal) under each wing and up to four 7.62mm Dillion Aero M134 Miniguns able to shoot up to 3,000 rounds per minute”, a military source said.

Super Tucanos are also equipped with “70mm rockets, air-to-air missiles such as the AIM-9L Sidewinder, air-to-ground weapons such as the AGM-65 Maverick and precision-guided bombs. It can also use a laser rangefinder and laser-guided weapons. The aircraft is used by air forces of 15 countries.

“There are plenty of countries that have an extremist threat – the Middle East and South and Central Africa. SOCOM (Special Operations Command) is asking for this for Nigeria, Somalia and Libya. It is a perfect platform for where we are fighting,” US Rep, Michael Waltz, (R) Fla told Warrior, a military publication.
The US-trained pilots with the Afghan Air Force had launched air strikes against the Taliban with A-29 Super Tucano aircraft, a platform which seems well-suited for the air force’s intended mission scope.

Its integrated weapons and laser-firing technology enable the platform to both lay down suppressive fire in support of advancing infantry and pinpoint targets for precision strikes. This mission envelope seems to enable a wide sphere of operational possibilities, to include counterinsurgency and great power challenges.

“The pilot is protected with Kevlar armour and provided with a zero/zero ejection seat. The clamshell canopy, hinged at the front and rear and electrically activated, is fitted with a de-icing system and features a windshield capable of withstanding, at 300k, the impact of a 4lb (1.81kg) bird. A Northrop Grumman onboard oxygen generation system (OBOGS) is installed.

“They have long loiter time and can stay close to the fight. They are interoperable in a very close-knit way with operations on the ground,” Waltz said.
The publication listed war situations in which A-29s could change the equation when it comes to counterinsurgency.

“First and foremost, they can save lives. If overhead fire support is able to identify and attack pockets of enemy fighters, fewer ground troops have to enter into enemy fire. Also, an overhead asset of this kind can be an intelligence node able to send targeting information and data regarding troop movements.

“When it comes to actual close-in counterinsurgency combat, fighters often obscure themselves in defilade or in buildings, requiring a need for precision strikes. The air-ground Maverick precision weapon can use a laser rangefinder and other kinds of advanced targeting technologies – providing what could be called an indispensable element of attack support”.

Naturally, advancing ground forces can benefit from air support while advancing on enemies for direct targeting or suppressive fire to enable forces to maneuver”, it said.

But a military expert, who spoke to THISDAY on the condition of anonymity, said the solution to the security crisis facing the nation lied with the stakeholders in the Nigerian enterprise.
“The super Tucano aircraft will no doubt boost military operations especially, the air force. But is that all? It requires a whole-of-government and whole-of-the-nation approach.

“Other factors will link government, unemployment and the issue of almajiri. The aircraft is not going to stop banditary and it’s not the responsibility of the military, we are concerned when matters get violent.
“The root cause has to be addressed. We have to ask how did we get here. Do you think that as the military, we are happy to be killing our citizens? We have to come together to ask how did we get to this level”, he said.

Speaking in a media interview, a security expert and analyst, Col Tony Nyiam (rtd) attributed the recent downing of a Nigeria Air Force (NAF) Alpha Jet by terrorists to the age of the aircraft and the inadequacies of fighting an unconventional warfare without accompanying modern technological devices that could aid the quick detection of enemy positions from the skies.

Nyiam said the fighter jet involved in the air mishap had been in use for over thirty years.
He affirmed that it was possible that the aged Alhpa Jet lacked a laser-guided capability and the pilot might have flown low to carry out a successful dive bombing, a field craft technique that may have rendered the old military aircraft vulnerable to small arms fire.

“It’s also possible that Flt Lt Abayomi Dairo may have been coming low to confirm that his target is not civilians. This is why he deserves our commendation.

“It may be inferred from all stated so far that the Alpha Jet aircraft didn’t come under the more dangerous surface to air missiles (SAMs) attacks, which is a much more sophisticated threat,” he said.
On the super tucano aircraft, he said: “What in my humble opinion is needed to combat the kind of unconventional armed forces is helicopter gunships. For example, Mi 17 or 24 or 32, Airborne platform, such as ‘Aerostat’ to act as the nucleus of the required tactical deployment.

“The use of first responders from the locals of area of military operations are essential. It’s through this type of combined tactical operations that real-time intelligence can be provided, thus making it easier to direct air and ground forces operations,” he said.

No fewer than 3,868 persons, it would be recalled, were killed in different states of Nigeria between January and June 2021, a mid-year report by an international human rights organisation based in Washington DC, Global Rights, reported.

The group, which tracked daily incidents of mass atrocities across the country, also put the number of persons who were abducted within the timeframe at 3,016, a 79.6 per cent increase compared to 615 incidents recorded within the same period in 2020.