Why President Buhari Travels To The UK For Medicals – Femi Adesina 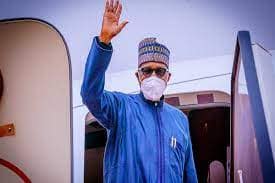 Femi Adesina, the Special Adviser to President Muhammadu Buhari on Media and Publicity, has defended his Principal over his frequent medical tour to the United Kingdom.

President Buhari had on Monday departed Nigeria for the UK to participate in the Global Education Summit on Financing Global Partnership for Education (GPE) 2021-2025.

After the event, he would spend a few days in London for an earlier scheduled medical check-up.

Speaking during an interview on Channels Television’s Politics Today, Adesina said President Buhari has used a medical team for over 40 years, hence the need to continue seeking medical help.

“President Buhari has been with the same doctors and medical team for upward of 40 years,” he said when asked why the President couldn’t have been treated in Nigeria.

“It is advisable that he continues with that who knows his medical history and that is why he comes to London to see them. He has used the same medical team for over 40 years. Once you can afford it, then stay with the team that has your history.”

⌊ President Muhammadu Buhari disembarks from the presidential jet during a trip to the United Kingdom.

When asked if the President would pilot the nation’s affairs from the UK, the presidential spokesman said there is no vacuum within the seat of power.

He explained that the Constitution empowers Vice President Yemi Osinbajo to act as President if President Buhari is not back to the country within 21 days.

“The nation is running, there is a vice president who will attend to critical issues. There is no vacuum and a constitutional amendment has sorted that out,” Adesina explained.

On the out-of-school children, Adesina who noted that there is a reduction of the situation said President Buhari would brief participants of the development in the country.

On the five-year commitment to the funding of education, Adesina stressed that his principal would make pronouncements on that.

At the UK Summit, President Buhari is expected to hold a bilateral meeting with Prime Minister Johnson and  would return to the country by the second week of August