US To Send Troops To Help Evacuate Personnel In Afghanistan 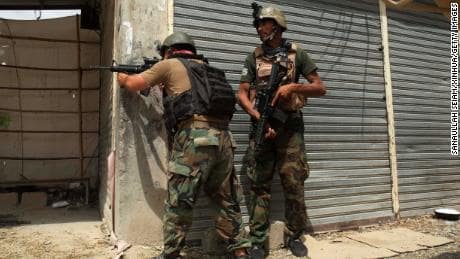 House Speaker Nancy Pelosi has requested an all-members briefing on Afghanistan from the Biden administration during the week of Aug. 23, when members return from recess, according to a Pelosi aide.

What we know: The United States is withdrawing personnel from its embassy in Kabul amid the deteriorating security situation in Afghanistan, leaving only “a core diplomatic presence,” the Biden administration announced Thursday as more cities fell to the Taliban.

Pentagon spokesperson John Kirby said 3,000 US troops are being deployed to assist with the drawdown, which is expected to be completed by the end of August.

Situation in Afghanistan is “a consequence of 20 years of American misjudgments,” says retired general

“For the Biden administration I think they reached the end of the road. It was clear that they weren’t going to be able to create or help create an Afghanistan government that supported its people. And without that government support, its military did not have the support of the people. And this is the consequence of it. It’s painful. It’s tragic,” Clark told CNN’s Jim Acosta.

“The truth is that what’s happening today is a consequence of 20 years of American misjudgments, of poor prioritizations and failed policies,” says Ret. Gen. Wesley Clark on Taliban gains in Afghanistan and the US sending troops to assist with the departure of embassy staff.

US tells Afghan president it remains “invested” in the country

Secretary of State Antony Blinken and Secretary of Defense Lloyd Austin stressed to Afghan President Ashraf Ghani “that the United States remains invested in the security and stability of Afghanistan in the face of violence by the Taliban,” according to a State Department readout of their call Thursday.

“Secretary Blinken and Secretary Austin informed President Ghani that the United States is reducing our civilian footprint in Kabul in light of the evolving security situation and will accelerate the tempo of Special Immigration Visa (SIV) flights,” the readout from State Department spokesperson Ned Price said. “The Secretaries both emphasized that the United States remains committed to maintaining a strong diplomatic and security relationship with the Government of Afghanistan.”

An unnamed State Department spokesperson denied reports that Austin and Blinken asked Ghani to step down in order to facilitate a ceasefire and transitional government.

“The United States has not asked President Ghani to resign and rumors indicating we have done so are completely false,” this spokesperson said. “Decisions about who leads the country are for Afghans to make.

The fall of Kandahar would be seen as a “death knell” for Afghan forces, CNN’s Clarissa Ward says

The Taliban captured two strategic cities on Thursday, leaving the Afghan capital of Kabul increasingly beleaguered and cut off from the rest of the country.

The city of Herat, Afghanistan’s third-largest city and a major urban center in western Afghanistan, fell to the Taliban on Thursday evening local time, with the militant group taking control of the governor’s office and Herat police headquarters, according to Afghan officials.

That morning, the city of Ghazni, a provincial capital on the road to Kabul, also fell to the militant group after “long and intense fighting,” according to Nasir Ahmad Faqiri, head of Ghazni provincial council.

Ghazni is the 10th provincial capital to fall to the Taliban in roughly a week. The city lies around 93 miles (150 kilometers) south of Kabul, on a major highway connecting the capital with Kandahar, Afghanistan’s second largest city.

Kandahar, which lies in the south of the country, has been besieged by the Taliban for weeks, and the group’s spokesperson claimed on Wednesday that they had taken control of its prison. The Taliban claimed they had freed 1,000 inmates and distributed a video apparently showing them walking outside the jail.

Gul Ahmad Kamin, a Kandahari member of parliament, told CNN Taliban fighters have been able to break through the frontline into Kandahar and were engaging in sporadic confrontation with government forces inside the city.

Kamin also confirmed that a wedding hall in Kandahar which was the frontline position for Afghan forces is now under the Taliban control. The wedding hall, visited by CNN just days ago, is about 600 meters away from the prison.

What this means: With the capture of Ghazni, the Taliban is now in control of key locations both to the north and south of Kabul. Their earlier capture of areas of the Baghlan province, which lies to the north of Kabul, raised alarms among US officials because the location is considered essential for the defense of the capital, according to a Biden administration official.

A senior administration official familiar with one US intelligence assessment said Kabul could be isolated by the Taliban in the next 30 to 60 days, increasing the potential that the Afghan capital could fall under the control of the militant group.

Another assessment puts the potential collapse within 90 days, according to another US official. Other officials have warned that there are multiple assessments with differing timelines.

Read more about the situation on the ground here.

The Department of Defense is sending three infantry battalions, which consists of up to 3,000 US troops, to Hamid Karzai International Airport in Kabul, Afghanistan, in the next 24-48 hours to assist with a “reduction of civilian personnel at the embassy in Kabul,” Pentagon press secretary John Kirby said during a briefing at the Pentagon on Thursday.

Two of the infantry battalions are US Marines and one is US Army, Kirby said. All three battalions are coming from the Central Command area of responsibility, which is the part of the US military based in the Middle East.

The Defense Department will also bring in about 1,000 personnel from both US Army and US Air Force to “facilitate the processing of” Special Immigrant Visa applicants, Kirby said.

“Initial elements of this movement, of this element, will arrive in Qatar in the coming days,” he added.

The Defense Department is also moving “one infantry brigade combat team” from Fort Bragg in North Carolina to Kuwait “where they will be postured and prepared if needed to provide additional security at the airport,” Kirby said.

Those forces will arrive in Kuwait “sometime in the next week,” Kirby said.

State Department spokesperson Ned Price stressed that the US Embassy “remains open in its current location” and continues its diplomatic work but would not say if it will remain in that location.

CNN reported this afternoon that the US is considering relocating its embassy to the Kabul airport amid the deteriorating security situation in Afghanistan, per a US official, Western diplomatic source and another source familiar with the situation.

“We are always … reviewing the environment, in especially complex operating environments, of course that includes Kabul. Today’s announcement is really a continuation of one of our most important responsibilities and that is doing all we can to ensure the safety, security, welfare, wellbeing of our people,” he said.

“We are planning for all contingencies,” he said.

US Vice President Kamala Harris told reporters Thursday she expects to be briefed today on the ongoing situation in Afghanistan.

Pressed by reporters on if Afghanistan is lost to the Taliban, Harris told pool, “I am going to leave here to continue the briefings that we have been receiving, and we will keep you posted.”

Harris was meeting in her ceremonial office with business leaders to discuss the importance of care policies for families, businesses, and the economy.

About 3,000 US troops will go into Afghanistan to assist with any departure of US diplomats and any possible evacuations, a US defense official tells CNN.

The troops will provide security for US personnel.

“The military will be there to help effect an orderly and a safe reduction in our personnel. I do expect that the military will help with these relocation operations but as we know, Hamid Karzai International Airport does remain open, commercial flights continue to take off and land at the airport. So the military is not the only way in or out of Afghanistan,” State Department spokesperson Ned Price said at a State department briefing Thursday.

Price rejected the notion that the drawdown was a prelude to an evacuation.

“This is not a full evacuation,” he said. “I think it’s a very important distinction between planning and contingency planning.”

The US Embassy in Kabul again urged American citizens to leave Afghanistan “immediately” amid rapid Taliban gains in the country.

It is the second such security alert in less than a week urging the immediate departure of US citizens.

The embassy issued its alert as the Taliban continued its assault, seizing major cities and capitols, dealing blow after blow to the Afghan government, its army and the US and its allies who trained Afghan forces.

The Taliban wave comes just weeks before US troops are scheduled to complete their withdrawal, with US intelligence agencies forecasting that within months, if not weeks, Kabul could be isolated, and perhaps fall, raising questions about the security of the US embassy and other foreign missions in Kabul.