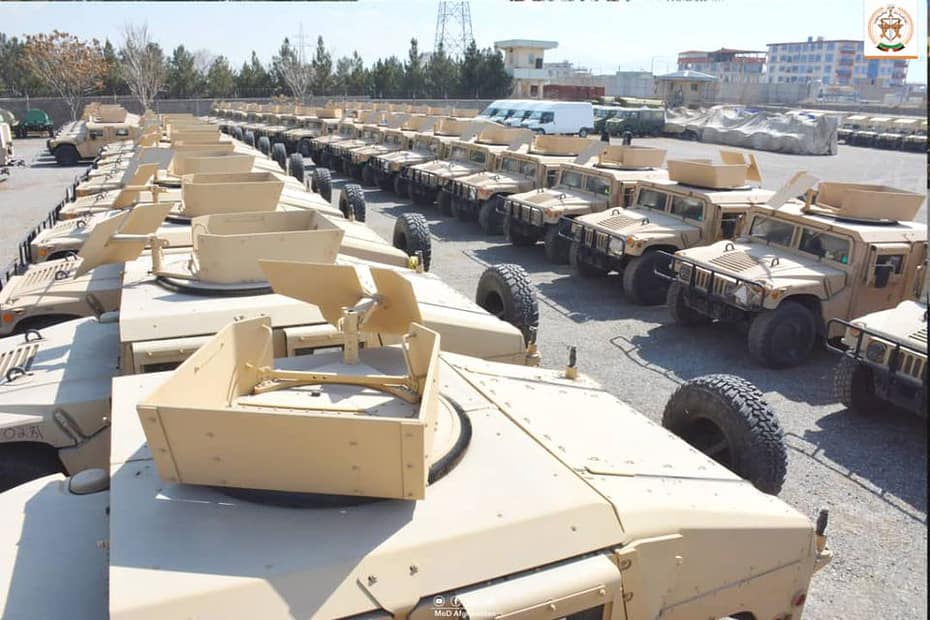 US national security officials are working to account for more than 20 years worth of weapons provided to the Afghan military as images of Taliban fighters brandishing American-made rifles and riding in abandoned Humvees are raising concerns about what else was left behind.

The Taliban’s newfound American arsenal is likely not limited to small arms, as the group captured sizable stockpiles of weapons and vehicles held at strongholds once controlled by US-backed forces, including modern mine-resistant vehicles (MRAPs) and Humvees.

Initial estimates suggest the Taliban may now also possess several Black Hawk helicopters and other US-funded military aircraft, according to a congressional source familiar with early assessments provided by defense officials.
That potentially includes roughly 20 A-29 Tucano attack planes, the source said, noting there are some indications that only a small number of aircraft were relocated from a base in Kandahar before it was overrun by the Taliban.
“We are also concerned that some may end up in the hands of others who support the Taliban’s cause,” the congressional source told CNN. “My biggest fear is that the sophisticated weaponry will be sold to our adversaries and other non-state actors who intend to use it against us and our allies.”

Taliban fighters stand guard at an entrance gate outside the Interior Ministry in Kabul on August 17, 2021.
It’s unclear exactly how much equipment fell into Taliban hands during the collapse of the Afghan military, and the US is unlikely to get a perfect and precise answer to that question because there is no longer a US troop and intelligence presence throughout the country, two defense officials told CNN.
“There’s no exact accountability on what’s left,” one official said.
The Biden administration has faced a wave of criticism for failing to anticipate the Taliban’s rapid takeover of Afghanistan and for the chaos unfolding at Kabul’s airport as thousands of people attempt to flee the country.
Evacuation operations remain the administration’s primary focus but officials at the Pentagon and the State Department are also beginning to take stock of the American weapons that have fallen into Taliban hands, an effort that sources tell CNN will likely take weeks or months due to the sheer volume of arms provided to Afghan forces over the last two decades.
In the interim, photographs and videos showing Taliban fighters carrying US-supplied M4 carbines and M16 rifles are fueling questions about how much American firepower the militant group now has at its disposal after seizing military bases across Afghanistan.
While US officials stress it is too early to provide details about specific weapons and vehicles now under Taliban control, Pentagon officials have already expressed concerns.

Biden administration embroiled in internal blame-shifting amid Afghanistan chaos
“When it comes to U.S.-provided equipment that is still in Afghanistan and may not be in the hands of ANSF [Afghan National Security Force], there are several options that we have at our disposal to try to deal with that problem set,” Pentagon spokesman John Kirby said on Thursday.
“We don’t, obviously, want to see our equipment in the hands of those who would act against our interest or the interest of the Afghan people, and increase violence and insecurity inside Afghanistan,” he added.
At the moment, there are no plans for the US to take any action to destroy the weapons by using airstrikes or other means, unless something poses a direct threat to American troops at the airport, administration officials told CNN.
The destruction and removal of US equipment in Afghanistan started in earnest shortly after the Trump administration signed the Doha agreement in February 2020, and the military began reducing its footprint from 8,500 troops to 2,500. But it began, at a slower pace, even before that, when in 2018 US force levels dropped below 14,000.
Between 2013 and 2016, the US gave Afghan forces more than 600,000 light weapons, such as M16 and M4 rifles and nearly 80,000 vehicles, as well as night vision goggles, radios and more, according to a 2017 Government Accountability Office report. Even more recently, the US Defense Department supplied the Afghan military with 7,000 machine guns, 4,700 Humvees and more than 20,000 grenades between 2017 and 2019, a report from the special inspector general for Afghanistan reconstruction found. (The GAO and the special inspector general removed these reports at the request of the State Department to protect any Afghans identified within.)
Taliban windfall: American weaponry
In the last two years alone, the US has also given the Afghan military more than 18 million rounds of 7.62mm and .50-caliber ammunition, according to a tally of the special inspector general’s quarterly reports.
Some of this no doubt fell into Taliban hands, officials say. In the final weeks of the withdrawal, a number of the strikes the US carried out in Afghanistan were designed to destroy American equipment about to be overrun by the Taliban, two officials said. The US didn’t destroy all of the equipment left for the Afghan military because it believed, until it was too late, that Afghan forces would fight back.
However, the fact that a significant number of weapons and vehicles were left behind is a symptom of the broader lack of planning that went into the withdrawal itself, according to Bill Roggio of the Long War Journal.
“There were so many problems with the decision to withdraw, and as soon as the decision was made by President Biden the military’s singular focus was to draw down,” he told CNN.
“He had no time to consider how to transition — things like how the Afghan would operate on its own and maintain its own aircraft. How the US would transition weapons systems to the Afghans and to assess the viability of the Afghan security forces,” Roggio added.
Even before Biden’s withdrawal announcement earlier this year, US officials acknowledged that even if the initial withdrawal deadline of May 1 were extended, some equipment may have to be destroyed or handed off to the Afghan military — noting the latter carried an obvious risk of it being seized by the Taliban, according to a source familiar with internal planning discussions about Afghanistan at the time.

The Taliban have published a series of photographs of their fighters at an Independence Day parade brandishing US assault weapons.
Striking the right balance between leaving enough resources for Afghan forces to continue fighting and mitigating the risk of weapons falling into the wrong hands was always going to be a difficult challenge for the US military, but it was compounded by the fact that the Biden administration was seemingly caught off guard by the speed of the Taliban advance — something the President and top officials have acknowledged publicly.
While the Taliban can certainly make immediate use of US-made small arms and armored vehicles, officials are skeptical they can turn American aircraft into a viable fighting unit.
“Our soldiers, sailors, and airmen spend months and months training to use their aircraft,” one official said. “The Taliban doesn’t.”
“The more sophisticated weaponry is a far greater challenge for the Taliban,” Roggio told CNN.
“The helicopters and planes are going to be very difficult for them to maintain as viable over a long period of time. Less so the Russian aircraft, which they have more experience with, and the Pakistanis could help with those too,” he added. “They may be able to use the aircraft in the short and medium term but without some type of supply chain it makes their life span relatively short.”
“What they really gained in combat power is the armored vehicles and the light armored vehicles and even some tanks and artillery pieces,” Roggio said.