9/11 20th Anniversary Of Attacks: US Honours The Dead 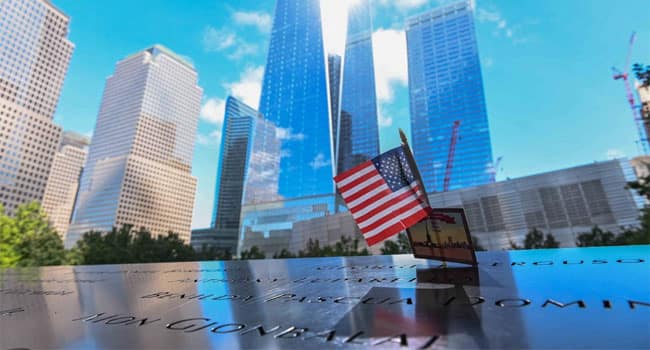 America marks the 20th anniversary of 9/11 on Saturday with solemn ceremonies given added poignancy by the recent withdrawal of troops from Afghanistan and return to power of the Taliban.

Commemorations will unfold at each of the three sites where 19 Al-Qaeda hijackers crashed packed airliners, striking the cultural, financial, and political hearts of the United States and changing the world forever.

In a video posted on the eve of the anniversary, President Joe Biden urged Americans to show unity, “our greatest strength.”

“To me, that’s the central lesson of September 11th. It’s that at our most vulnerable, in the push and pull of all that makes us human, in the battle for the soul of America, unity is our greatest strength,” Biden said in a six-minute message from the White House.

At New York’s Ground Zero, where two pools of water now stand where the Twin Towers used to, relatives will read out the names of the nearly 3,000 people killed, in a four-hour-long service starting at 8:30 am (1230 GMT).

Six moments of silence will be observed, corresponding with the times the two World Trade Center towers were struck, and fell, and the moments the Pentagon was attacked and Flight 93 crashed.

Monica Iken-Murphy, who lost her 37-year-old husband Michael Iken in the World Trade Center, says this will be a “heightened” anniversary for many Americans.

But for her, as for many other survivors, the pain has never wavered.

“I feel like it just happened,” she told AFP.

A whole generation has grown up since the morning of September 11, 2001.

In the interim, Al-Qaeda founder Osama bin Laden has been hunted down and killed. A towering new skyscraper has risen over Manhattan, replacing the Twin Towers. And less than two weeks ago, the last US soldiers flew from Kabul airport, ending the so-called “forever war.”

But the Taliban who once sheltered bin Laden are back ruling Afghanistan, the mighty US military humiliated. In Guantanamo Bay, accused 9/11 mastermind Khalid Sheikh Mohammed and four other men continue to await trial, nine years after charges were filed.

Even the full story of how the attack came to happen remains secret. Only last week did Biden order the release of classified documents from the FBI investigation over the next six months.

At Ground Zero, 2,753 people, from all over the world, were killed in the initial explosions, jumped to their deaths, or simply vanished in the inferno of the collapsing towers.

At the Pentagon, an airliner tore a fiery hole in the side of the superpower’s military nerve center, killing 184 people in the plane and on the ground.

And in Shanksville, Pennsylvania, the third wave of hijackers crashed into a field after passengers fought back, sending United 93 down before reaching its intended target — likely the US Capitol building in Washington.

Biden and First Lady Jill Biden will stop at each of these places on Saturday to “honor and memorialize the lives lost,” the White House said.

In his video address Friday night, Biden urged Americans to come together as they reflect on the tragedy.

“Unity doesn’t mean we have to believe the same thing, but we must have a fundamental respect and faith in each other and in this nation,” Biden said.

The president had planned for this to be a pivotal day in his nearly eight-month-old presidency.

However, instead of presiding over a moment of unity, Biden will traverse a country angry about the messy Kabul evacuation, which included 13 US soldiers killed by a suicide bomber, and stung by the broader realization of failure and defeat.

For the relatives of victims, the anniversary, as always, is about keeping the memory of their loved ones alive.

“People who weren’t alive don’t have the same feeling about it as those who were alive. But America has never forgotten about Pearl Harbour and America will never forget about 9/11.”