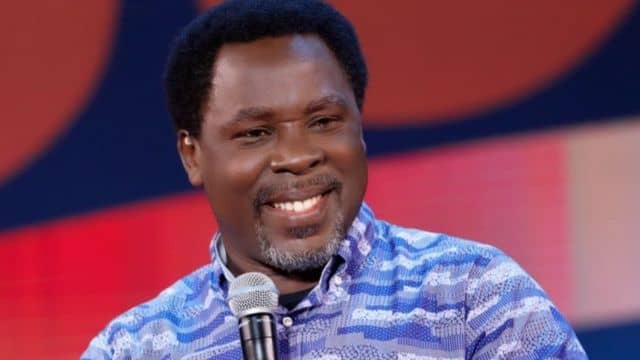 Top Nigerian pastors and religious leaders were absent as the founder of Synagogue Church of All Nations, Temitope Balogun Joshua, aka TB Joshua, was laid to rest on Friday.

The PUNCH had reported that T.B Joshua, who was laid to rest in the church premises at Ikotun, Lagos, died a few days to his 58 birthday anniversary.

The cleric was said to have died after concluding a program at the Synagogue Church Of All Nations on Saturday, June 5.

SCOAN had at a news conference on June 29 said that July 5 to July 11 would be dedicated for a series of Joshua’s ‘laying to rest’ activities tagged: ‘Celebrating the Life and Legacy of Prophet Joshua (1963 to 2021)’.

However, some prominent Nigerians and dignitaries, including the Governor of Ondo State, Rotimi Akeredolu; the Aare Oona Kakanfo of Yorubaland, Aare Gani Adams; Wife of the Ooni of Ife, Olori Naomi Adeyeye; a former Minister for Aviation, Mr. Femi Fani-Kayode and High Chief Bibopere Ajube, attended the funeral.

When the televangelist died, the Christian Association of Nigeria and many pastors were initially silent.

However, 72 hours after the death of the founder of the SCOAN, CAN issued a terse statement to condole his family and SCOAN congregation.

The condolence, which observers believed was belated, came following condemnation of its silence among Christendom and several organizations in the social media.

Critics wondered why CAN would commiserate with others but would wait for a long time before making a statement on Prophet T. B. Joshua.

Also, the absence of many of the pastors has received a mixed reaction on social media, especially Twitter.

“Oh get a grip all of you in the comments, nobody hated him, it was an issue of doctrine on salvation, apparently the deceased had his own philosophy which many thought to be contrary to the bible.
If you notice, I included, I haven’t seen the deceased make an altar call for repentant souls,” a tweep, @black_ash422, said.

“I sincerely don’t understand why many of them didn’t go. We are humans and not God, we should not judge others. They deserve to pay him last respects,” another tweep, @Chukwu, added.

In an earlier statement, the President of CAN, Dr. Samson Olasupo Ayokunle, described TB Joshua as “one of the foremost Nigerian charismatic pastor, televangelist, and philanthropist who devoted his entire life to the propagation of the gospel.”

He said, “Prophet T.B Joshua was one of the foremost Nigerian charismatic pastor, televangelist, and philanthropist who devoted his entire life to the propagation of the gospel and ministering to the needs of the downtrodden. He was renowned for his philosophical simplicity and humility. His death is not only a loss to the family and the church, but to Nigeria and the world at large.

“On behalf of all members of the Christian Association of Nigeria, we commiserate with you, and the entire family on this loss. It is our prayer that the Almighty God grant Prophet TB Joshua an eternal rest in his creator, and may God’s perpetual light continue to shine on his path (Amen). Once again, please accept our heartfelt condolence.”