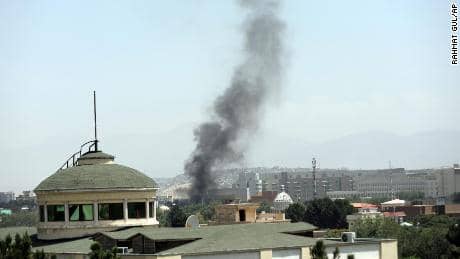 The debacle of the US defeat and chaotic retreat in Afghanistan is a political disaster for Joe Biden, whose failure to orchestrate an urgent and orderly exit will further rock a presidency plagued by crises and stain his legacy.

But a stunning Taliban blitzkrieg followed more than 20 years of US and allied policy failures, misunderstandings of Afghan politics and culture, public war fatigue and the culpability and corruption of the failed state’s leaders.
And while Biden’s political and geopolitical rivals rush to exploit his mistakes, the true magnitude of the crisis can only be judged in the human tragedy of a people again subject to Taliban persecution. And a failure to fulfill the now apparently near-impossible tasks of evacuating all the Afghan translators, workers and fixers on whom the US relied and who now face Taliban retribution would besmirch America’s conscience and global reputation.

Read Also: US To Send Troops To Help Evacuate Personnel In Afghanistan

“It is a stain on our nation’s integrity and honor that even just a few months ago, we were not meeting our obligation to the men and women, our Afghan allies who served alongside us,” Jake Wood, a former US Marine and Afghan war veteran, told CNN’s Pamela Brown on Sunday. “We owe them the special immigrant visas. We owe them safety, every bit as much as we owe safety to our embassy workers in Kabul.

What will an Afghanistan under the Taliban look like? Its rise to power in the ’90s paints a grim picture
The US launched the Afghan war 20 years ago in a mood of vengeance, resolve and unity, after al Qaeda’s attacks on New York and Washington shattered the post-Cold War myth of American hyper power. It is ending it in a rushed race to get out, humbled by a primitive militia, that is nevertheless ready to die for jihad on its home soil and is re-imposing its feudal writ on a war-ravaged nation that bleeds foreign invaders dry.
That a war that killed or maimed thousands of Americans, many more Afghan civilians and cost a trillion dollars, ended so abruptly with such an ignominious eclipse was shocking. But it perhaps should not have been.
Ironically, Biden’s mismanagement of the withdrawal from Afghanistan underscored his core point — that US visions of forging a functioning nation were illusory and that many more years of US involvement would not make any difference. The evaporating Afghan forces and police that the US spent billions building up to fight the Taliban mystified many Washington officials. This encapsulated how top military brass and diplomats were misled by their own preconceptions and the investment of years of US blood and treasure, troops surges, drawdowns, diplomatic offensives and arbitrary timelines to leave.
The sudden Afghan crisis, that developed at stunning speed — at least to most people in Washington who had long since looked away from the country’s longest war — is the most serious political reversal yet for Biden. And it came only days after he celebrated his biggest victories so far — the passage of more than $4.5 trillion combined in infrastructure and budget spending through the Senate. The win defied the skeptics who had long mocked his vow to bring Republicans and Democrats together, followed his earlier signing of a huge Covid-19 relief bill and bolstered his reputation as an effective domestic leader. Much of that momentum — at least for now — risks being drowned out by the imagery of American defeat abroad.

Biden carries the can

Biden now finds himself carrying the political can for two decades of the missteps of others — after adding his own errors. He will be accused of rushing the US exit to create a favorable political narrative as the President who got US troops home before the 20th anniversary of the September 11 attacks in 2001 — plotted by al Qaeda from Afghanistan — and ahead of next year’s midterm congressional elections.
At the same time, Biden was doing exactly what most Americans, exhausted by long years of foreign quagmires and confused as to why US troops were still in Afghanistan 20 years after 9/11, wanted. There was no national support for escalating the war. To check the Taliban advance, the President would have had to deploy thousands more US troops and to wage new combat without public support. That and his own long-term skepticism about the war left his own withdrawal decision almost inevitable. But the strength of the Taliban advance caught the White House flat footed.
Try as Secretary of State Antony Blinken did on Sunday talk shows, there is no way to spin events of the last few days as anything but a domestic political, and geopolitical, wreck.
After telling troops to leave, Biden has now had to retain 6,000 of their comrades in Afghanistan to secure the retreat of US personnel at the embassy as Kabul airport is besieged with crowds wanting to leave.
A failure to safely get all Americans out, or any ensuing US troop casualties, would threaten catastrophic political damage for the President amid fresh comparisons with the haunting US legacy of Vietnam.

US completes evacuation of embassy in Afghanistan as flag comes down at diplomatic compound
Biden’s judgment as commander-in-chief is being called into question since he is on record, in damning video footage, saying that the Taliban’s victory was “not inevitable.” He said there would be no Saigon-style pictures of helicopters lifting off the roof of the US embassy in Kabul. That exact scenario unfolded this weekend after the US rushed to get its people out, and the Stars and Stripes was run down the flagpole as the fundamentalist militia routed by the United States in 2001, surged back into the Afghan capital.
Biden remained at Camp David over the weekend and did not speak to the American people on camera. He did release a paper statement justifying his decision to leave Afghanistan, in which he spoke, misleadingly, about an “orderly” evacuation. And photos of Biden in a secure conference room at the presidential retreat, in a polo shirt, speaking with officials on screen, hardly promoted the intended image of an engaged commander-in-chief.

On CNN’s “State of the Union” on Sunday, Blinken argued that the US had completed its mission — crushing al Qaeda — and that Biden had been left in an impossible position by ex-President Donald Trump’s deal with the Taliban for the US to leave for good in May, a deadline slightly extended by his successor.
If Biden had breached that agreement, Blinken said: “We would have been back at war with the Taliban. And we would have been back at war, with tens of thousands of troops having to go in, because the 2,500 troops we had there and the air power would not have sufficed to deal with the situation.” Despite his defense of the administration’s preparations, Blinken did express surprise at the “hollowness” of the Afghan forces and their collapse and the swift folding of the US-backed democratic government in Kabul.
The Secretary of State made some solid points. The initial US victory in Afghanistan over al Qaeda and the Taliban for harboring Osama bin Laden’s terror group did prevent any repeat of 9/11. And Trump did intend for an even quicker withdrawal than Biden. It’s not clear if Trump put any plans in motion to secure an evacuation of US personnel, embassy staff or Afghan translators who supported two decades of US military effort when he signed an agreement with the Taliban to pull US troops out by May of this year.
The Trump administration’s decision to hold negotiations with the Taliban — who Trump had hoped to invite to Camp David — without the Afghan government present — made Afghan government officials and security forces question the support of the US, some analysts say.
Scenes from the Afghan capital left the President open to easy Republican attacks.
“I ask President Biden to stop finding excuses for his own mistakes and address the country in person,” House Republican leader Kevin McCarthy of California said in a statement. Republican Sen. Minority Leader Mitch McConnell complained about the “botched” exit from Afghanistan, adding in a statement: “Everyone saw this coming except the President, who publicly and confidently dismissed these threats just a few weeks ago.” On “State of the Union,” the top Republican on the House Armed Services Committee, Rep. Michael McCaul of Texas, blasted Biden for presiding over an “unmitigated disaster of epic proportions.”
That many of those aiming the sharpest criticism of Biden advocated the kind of hawkish policies and long engagement in Afghanistan that failed year-after-year, and helped lead to this weekend, is unlikely to quell the political storm raging around the President.

Another blow to the US image abroad

Biden’s challenge must now prevent a narrative of failure developing around his administration. The President was already faced with a resurgence of the pandemic — thanks to the refusal of many conservatives to take free, life-saving vaccinations. And despite soaring job creation numbers and Biden’s infrastructure win, Republicans are citing rising inflation and record numbers of undocumented migrants being turned back at the US border to claim his presidency is in crisis.
Still, given the deep skepticism of the American public about the cost and the outcome of the post-9/11 wars, snap judgments that the current crisis will permanently wound Biden are premature.
Internationally however, the messy US exit from Afghanistan will spur doubts about Washington’s steadfastness as an ally.
After declaring “America is back” following the alienating and destabilizing Trump era on his first overseas trip to Europe earlier this summer, Biden’s first real foreign policy crisis is over a botched US retreat. And the President’s clarion calls for the protection of democracy abroad will be undermined by his decision to abandon a fragile democratic government in Afghanistan.
(Text excluding headline,
CNN)