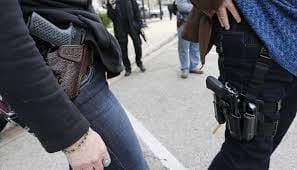 Protesters walk toward the Texas State Capitol on January 17, 2021, in Austin

A new pro-gun law in Texas that went into effect Wednesday allows most Texans who legally own a firearm to carry it openly in public without obtaining a permit or training, a measure that experts say will make it more challenging for law enforcement to protect the public from gun violence.

The controversial “constitutional carry” legislation is the latest in a series of pro-gun bills that state lawmakers passed this year as gun violence incidents rise in Texas and across the country.
The number of shootings in Texas, not including suicides, increased 14% this year with roughly 3,200 shootings compared to the same period in 2020, which recorded roughly 2,800 shootings, according to data compiled by the Gun Violence Archive (GVA). Gun violence incidents this year represent a 50% increase over the same period in 2019, which saw 2,100 shootings, the data shows.
“In Texas, repealing the permit altogether is a radical change,” said Andrew Karwoski, a policy expert at Everytown for Gun Safety, the largest gun violence prevention organization in the country. “Just allowing almost anyone to carry a handgun in public, no questions asked, no background check or safety training, is really dangerous.”
Conservative activists had lobbied for permitless carry proposals for years, but they were stalled in the past three legislative sessions. Declaring that the law “instilled freedom in the Lone Star State,” Gov. Greg Abbott signed the bill — which the state House of Representatives approved in an 82-62 vote — into law in June despite opposition from Democrats, some policing leaders and gun control advocates.

Gun shop owner Jesus “Chuy” Aguirre, left, attends to customer Angel Zacarias on Thursday at Chuy’s Gun Shop in El Paso, Texas, as anticipation builds regarding the new Texas gun law.
Dallas Police Chief Eddie Garcia said people open carrying firearms have made it harder for officers to differentiate a “good guy with a gun from a bad guy with a gun.”