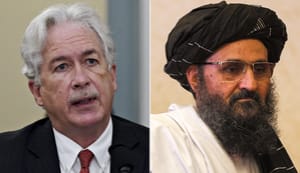 The Taliban said Tuesday that they were “not allowing the evacuation of Afghans anymore” and warned that the US must stick to next week’s deadline to pull out, as a frantic Western evacuation operation at Kabul airport picked up pace.

The announcement came as US President Joe Biden made clear he aims to stick with his August 31 deadline to withdraw troops from Afghanistan — as long as the Taliban does not disrupt ongoing evacuation operations or airport access. Top American allies have already called for an extension in order to fly more people out.
Taliban spokesman Zabiullah Mujahid told a press conference Tuesday that while foreign nationals could continue traveling to the airport, the huge crowds of Afghans that have gathered there in recent days should return home and would not face reprisals from the country’s new rulers.
“The road, which goes to the airport, is blocked. Afghans cannot take that road to go to the airport, but foreign nationals are allowed to take that road to the airport,” Mujahid said.
“We are not allowing the evacuation of Afghans anymore and we are not happy with it either,” he added.
The doctors and academics of Afghanistan “should not leave this country, they should work in their own specialist areas,” Mujahid added. “They should not go to other countries, to those Western countries.”
Asked about the statement from the Taliban, White House press secretary Jen Psaki said that should not impact Afghans who were prioritized by the US to leave the country. “No. That is not how you should read it,” Psaki said.
“Our expectation, which we have also conveyed to the Taliban, is that they should be able to get to the airport,” she later added.
Many of those fleeing the country since the Taliban took over have been educated people, especially women. The last time the Taliban ruled, women were banned from working and forbidden to attend schools and universities.
Mujahid also gave reassurances that foreign embassies and aid agencies would remain open.
But experts remain dubious of such pledges amid reports of human rights abuses and concerns that the situation will deteriorate further once most of the international community leaves the country.
G7 leaders were meeting Tuesday in the first such international forum since the Taliban toppled the internationally-backed Afghan government more than a week ago.
They have called on the Taliban to guarantee safe passage for all those wishing to leave Afghanistan after August 31, UK Prime Minister Boris Johnson said Tuesday, describing this as the G7’s “number one condition” for the Taliban.
“The number one condition we are setting as G7 is that they’ve got to guarantee right the way through — through August 31 and beyond — safe passage for those who want to come out,” Johnson said after the virtual meeting of G7 leaders.

Biden sticks to his self-imposed deadline

Biden has already requested contingency plans in case the US withdrawal deadline slips — though operations are running on schedule for now. Staying on schedule will require the Taliban’s cooperation, he said at a press briefing Tuesday.
“The sooner we can finish the better. Each day of the operations brings added risk to our troops, but the completion by August 31 depends upon the Taliban continuing to cooperate and allow access to the airport for those we’re transporting out, and no disruptions to our operations,” the US President said.
“In addition, I’ve asked the Pentagon and the State Department for contingency plans to adjust the timetable should that become necessary,” he added.
Biden had faced growing pressure from top US allies, including the UK and France, to extend the deadline.
French Foreign Minister Jean-Yves Le Drian said on Monday that additional time beyond the August 31 deadline is necessary for evacuations.
A Elysee spokesperson added on Tuesday that the length of France’s military evacuation operation depends entirely on when the United States decides to pull its soldiers out of Kabul’s airport.
“We are in the hands of the United States,” the spokesperson said during a press briefing. “What we are telling the Americans is naturally to give us the maximum time to pursue the operations.”
At the White House briefing on Tuesday, Psaki said that if August 31 holds as the date of US withdrawal from Afghanistan, evacuations will need to end even earlier to leave time to withdraw troops and machinery.
The decision will be met with dismay by allies who fear there won’t be enough time to get their citizens, along with Afghans who assisted in the war effort, out of the country by the end of the month.
Despite the pressure on Biden, NATO will also pull its footprint from Afghanistan when the US withdraws, according to a diplomat familiar with the matter.
The diplomat said people on the ground in Kabul were not pleased by Biden’s decision to stick to the deadline, saying there is “an evident disconnect between the reality and the politics.” They estimated that tens of thousands of people would be left behind because of the August 31 deadline.
CNN has reached out to NATO for comment.

CIA director met with Taliban leader in Kabul on Monday amid evacuation efforts
Military advisers had told the White House that the decision on the deadline had to be made by Tuesday in order to have enough time to withdraw the 5,800 troops currently on the ground, as well as their equipment and weapons.
The US evacuated a record 12,700 people from Kabul airport between Monday and Tuesday morning, according to a White House official, and another 8,900 people were evacuated by 57 coalition flights. The US has now evacuated some 58,700 people from Afghanistan since August 14.
Meanwhile it emerged that CIA Director William J. Burns had met face-to-face with a top Taliban leader in Kabul on Monday, in what one US official described as “an exchange of views on what needs to happen to be done” by August 31.
The Biden administration has been in regular contact with Taliban officials throughout the course of the evacuation process, both on the ground in Afghanistan and in Doha, Qatar.
But the covert meeting, first reported Tuesday by The Washington Post, between Burns and Taliban co-founder and deputy leader Abdul Ghani Baradar amounts to the highest-level direct exchange of views since the militant group took control of the capital, a US official briefed on the matter told CNN.
Meanwhile, European Union officials said Tuesday that the bloc’s relations with the new Afghan authorities will be subject to “strict conditions” regarding the “deeds and attitudes” of the new regime.
“It is too early to decide what kind of relations will develop with the new Afghan authorities,” European Council President Charles Michel said after the meeting with G7 leaders.

US Evacuates Record Number From Airport

The number of evacuees in and around Kabul airport swelled to around 20,000 over the weekend. But the pace of airlifts has sharply picked up in recent days, and as of Tuesday afternoon there were 4,671 people awaiting flights, Lieutenant Colonel Brett Lea told CNN.
The vast majority of those still trying to get out of Kabul were Afghans, the source said, adding that applicants for the Special Immigrant Visa (SIV) program — an avenue for Afghans who worked for United States forces and agencies to get out of the country — were once again permitted into the airport.

Biden decides to keep August 31 deadline to withdraw from Afghanistan as evacuations accelerate
SIV applicants had been told not to come to the airport on Monday as the US tried to clear backlogs of evacuees and ensure US passport and green card holders got on aircraft out of Kabul before August 31.
The Pentagon said early Tuesday that 17 US military and partner nation aircraft evacuated approximately 16,000 people from Harmid Karzai International Airport within the previous 24 hours, with the US Air Force transporting just under 11,000 of them.
That gave an opening to expand the evacuation, the source said.
Read Also:
“The aperture has widened,” they said. SIV holders plus immediate family and anyone who can “clearly and credibly articulate a clear and credible connection” with the US government could now get out, the source said.
Despite that relaxation of restrictions, the gates to the airport remained closed, the source said.
“But the people who are already there or being pulled in individually, they’re flexing a bit,” they said.
About 300 US citizens had been brought in overnight, and moves were coordinated with the Taliban, the source said. The closure of the airport’s gates, however, significantly reduces the number of SIV applicants who can reach the base.
Afghan security forces continued to use unofficial means to get their colleagues and friends onto the base, the source said. “Not sure who the Afghans are still pulling in, but it seems to be a steady trickle,” they said.
The source also said there had been no progress in the evacuation of locally employed embassy staff, although planning was underway.
While the backlog of evacuees was being whittled down in Kabul, strain was showing up elsewhere in the route that would eventually lead evacuees to resettlement outside Afghanistan.
One of the main waypoints for evacuees, the massive US Ramstein Air Base in Germany, had reached its capacity of 7,800 evacuees on Monday.

A US Air Force air crew prepares to load evacuees aboard a C-17 Globemaster III transport aircraft at Hamid Karzai International Airport in Kabul on August 21.

The frantic evacuation race comes against the backdrop of “harrowing and credible reports” of civilian executions and restrictions on women’s rights under the Taliban in Afghanistan, UN High Commissioner for Human Rights Michelle Bachelet said Tuesday.
The reports included executions of civilians and members of the Afghan security forces, restrictions on girls’ right to attend schools, recruitment of child soldiers, and repression of peaceful protest, Bachalet told the UN’s Human Rights Council in Geneva.
“Many people now fear reprisals by the Taliban against those working with the government or the international community; people who have worked to advance human rights and justice; or those whose lifestyles and opinions are simply perceived to be opposed to the Taliban ideology,” Bachalet said.
The reports of violence lie in stark contrast to Taliban assurances to international media since seizing the capital over a week ago.
(CNN)