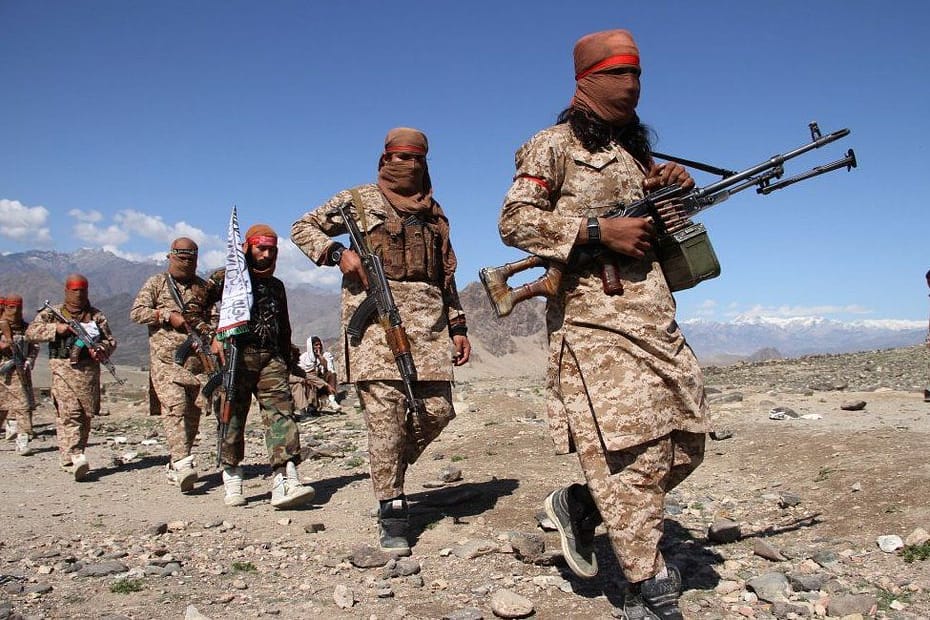 Over clear but unsteady video, the words ring out: “Surrender, commandos, surrender.” Several men emerge from a building; they are clearly unarmed.

Gunfire erupts. At least a dozen men are seen shot to death amid cries of “Allahu Akhbar” — God is Great.
The victims were members of an Afghan Special Forces unit: their executioners, the Taliban. The summary killings took place on June 16 in the town of Dawlat Abad in Faryab province, close to Afghanistan’s border with Turkmenistan.
CNN has obtained and verified several videos of the incident and has spoken with witnesses.
Videos show the commandos’ bodies strewn across an outdoor market. After a fierce battle to hold the town, they the commandos had run out of ammunition and were surrounded by the Taliban fighters, witnesses said.
In one video, about 45 seconds long, a bystander can be heard saying in Pashto, the local language: “Don’t shoot them, don’t shoot them, I beg you don’t shoot them.” The bystander then asks: “How are you Pashtun killing Afghans?” The Pashtuns are the main ethnic group in Afghanistan.
At the end of the video, another voice off-camera says: “Take everything off them.”
In another video, a man can be heard saying: “Open his body armor.” One fighter can be seen taking equipment off the body of one of the commandos.
The Red Cross confirmed the bodies of 22 commandos were retrieved.
The killing of the soldiers stands in stark contrast to the Taliban’s efforts to show it is accepting the surrender of soldiers and, in some instances, paying them to go home as it makes territorial gains across Afghanistan.
The Taliban posted a video three days after the fighting in Dawlat Abad, showing the seizure of military trucks and weapons. The video claimed that “the Washington guards, a CIA specially trained special commando who had been pursuing the Taliban in Dawlat Abad, Faryab, were captured alive by the Taliban, disarmed and handcuffed.”
The Taliban told CNN the videos showing the commandos being shot were fake and government propaganda to encourage people not to surrender. A Taliban spokesman said they were still holding 24 commandos who had been captured in Faryab province but provided no evidence.
The Afghan Ministry of Defense denied the Taliban was holding the commandos and told CNN they were killed.

They ‘shot them all’

According to several witnesses interviewed by CNN in Dawlat Abad, the commandos were shot in cold blood.
One man said the commandos arrived in the town with several tanks but ran out of ammunition after two hours of fighting and received no support from the air.
“The commandos were surrounded by the Taliban. Then they brought them into the middle of the street and shot them all,” the witness said.
He also suggested some Taliban fighters were not from the region and may have been foreign because he could not understand what they were saying when they spoke between themselves.
A second witness — a shopkeeper in the bazaar where the shooting took place — agreed some of the Taliban sounded foreign. He said the commandos “were not fighting. They all put their hands up and surrendered, and (the Taliban) were just shooting.”
Another shopkeeper corroborated this account: “I was so scared when the Taliban started shooting the commandos. On that day everyone was scared. I was hiding in my shop.”
He said he watched the shooting unfold through a small hole in the wall.
Local officials have criticized the dispatch of elite commandos to the town with no reinforcement or air cover.
Abdul Ahad Ailbek, a member of Faryab’s Provincial Council, said the force that arrived did not know the area, nor which districts the Taliban controlled.

Across Afghanistan, tens of thousands of civilians have been displaced amid a surge in fighting that followed US President Joe Biden’s announcement that all US troops will be withdrawn from the country by September 11.
Since then, the Taliban claims to have taken control of nearly 200 districts across Afghanistan — mostly in the north and north-west. In many areas, they have met little resistance.
In a statement Monday, the Taliban said “thousands of soldiers” had “defected and embraced the open arms of the Islamic Emirate,” which it claims is the true leadership of the Afghan people.
“Nearly two hundred districts were cleansed from their malicious presence,” the statement added.

The US military left Afghanistan’s Bagram Airfield on July 5, and didn’t notify the new Afghan commander for more than two hours.

According to the Long War Journal, which tracks territorial control in Afghanistan, as of July 10, 212 districts were under Taliban control, with 76 under the control of the government and 119 still contested.
In its statement, the Taliban claimed “fake videos and footage of years-old video showing activities of Daesh [ISIS] militias are also passed off as recent actions committed by the Mujahideen of Islamic Emirate.”
Afghan special forces — who are US-trained and better equipped than regular units — number some 11,000. But they are stretched thin as the Taliban steps up attacks across the country.
Now without US air support or intelligence gathering, their mission is even more challenging.
Afghan forces are sustaining heavy losses. CNN has obtained another video showing the bodies of commandos killed by the Taliban in another part of Faryab province last week.
The Red Cross confirmed they collected more than a dozen bodies from that location.

‘There will be no takeover’

One of those killed in Dawlat Abad was a 32-year-old commando Sohrab Azimi, who spent two years at a military school in the US and was due to marry his American fiancée next month.

Sohrab Azimi trained in the US.

His father — a retired general — told CNN Azimi was responsible for calling in air support. He did — but it never arrived.
“Anyone would be angry if that happened to their son. Why didn’t they support the operation and why did someone tell the Taliban they were coming?” asked Gen. Hazir Azimi.
“Afghanistan lost someone who was educated, who was the future — I am so sad for his loss.”
Gen. Azimi had nothing but contempt for the Taliban. “They don’t even respect dead bodies and soldiers who have surrendered,” he said.

General Hazir Azimi said his son was responsible for calling for air support but none came.

Abdul Ahad Ailbek, the Provincial Council member, said the “Taliban are the previous Taliban. They have not changed. Unfortunately, they do not have the freedom for the people.”
Afghanistan’s National Security advisor, Hamdullah Mohib, has sought to reassure Afghans the country will not fall to the Taliban.
“There will be no takeover by the Taliban,” Mohib said Monday. “The Afghan people are determined to defend our country, our people, and our values.”
When asked about the Dawlat Abad attack, Mohib claimed that many of the Afghan National Security Forces’s recent defeats stemmed from a lack of air support.
“The reality is that these were areas largely surrounded that couldn’t be defended, they needed to be supplied by air, and those soldiers ran out of ammunition,” Mohib said.
“There was a vacuum created as a result of the retrograde, but we’re trying to fill that gap.”
Mohib made the comments at a handover ceremony to formally pass command authority of Afghanistan from top US general in Afghanistan Gen. Austin Miller to Gen. Kenneth McKenzie, the leader of US Central Command.

General Austin Miller, the top US commander in Afghanistan, passes the flag of US-led Resolute Support mission to General Kenneth McKenzie, the head of US Central Command, on July 12.

Miller has repeatedly expressed concern about the pace of the Taliban’s territorial gains.
He says a political agreement cannot be achieved amid the escalating violence.
“I’m one of the US military officers who’s had the opportunity to speak with the Taliban,” Miller said. “And I’ve told them … it’s important that the military sides set the conditions for a peaceful and political settlement in Afghanistan.
However, the civilians in Dawlat Abad who spoke to CNN seemed wary of the Taliban and their intentions once foreigners leave.
Several told CNN the Taliban had quickly introduced new rules after taking over the area. Girls could no longer go to school and women could not go to the market unless accompanied by a man.
One witness to the commando shooting said: “The Taliban said that if foreigners left Afghanistan they would make peace. How long will they continue this killing of brothers in our country?”
Another witness to the attack said many people had left the town. He said he had one message for the Taliban.
“We are one Islam, we are one brother. Why are you killing your brothers? Come and sit with us and talk about this.”
(Text excluding headline and featured image by Getty Photos, CNN)