Taliban Crush Opposition Across Afghanistan, As Chaos Builds At Airport 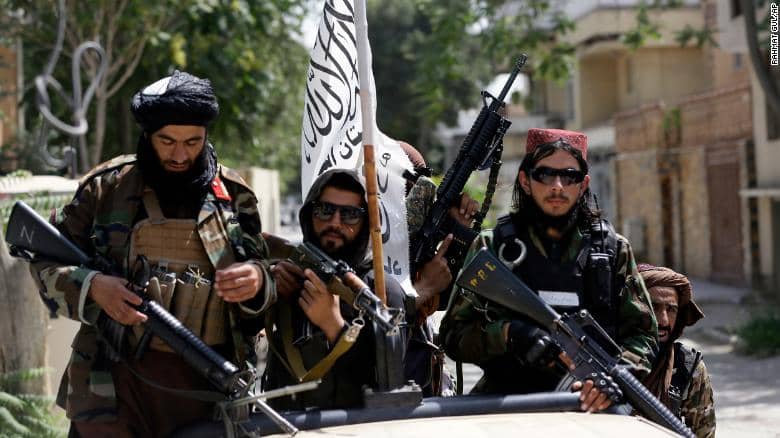 The Taliban have moved swiftly to crush early opposition to their rule across Afghanistan, clashing with protesters and forcing an entire city to stay inside, as a frantic rush to escape the country intensifies at Kabul’s international airport.

A curfew will be imposed “for an indefinite time” over the entire southeastern Afghan city of Khost on Thursday, multiple Taliban sources told CNN on Wednesday, after videos emerged on social media purporting to show hundreds of people there demonstrating against the militant group’s seizure of power.
All kinds of movement will be banned “while joint forces of the Islamic Emirate carry out clearance operations” in the city, one source said. Around 650,000 Afghans are estimated to live in the rural and urban areas of surrounding Khost province.
The rapid shutdown of opposition undermines the Taliban’s repeated attempts to convince international media and observers that their rule will be more restrained and inclusive than it was two decades ago.
But it reflects the reality across the country, where similarly severe approaches have been taken.
Tensions are especially heightened because August 19 is Afghanistan’s Independence Day, commemorating the date Britain relinquished control of the country in 1919.

Taliban fighters patrol Kabul on Thursday, Afghanistan’s Independence Day.
Afghans poured onto Kabul’s streets with the national black, red and green flag to mark the date on Thursday, in defiance of the Taliban. In some instances they removed the white and black Taliban flag; one witness told CNN the Taliban fired into the air to try and break up the procession. It is unclear if anyone was injured.

Large Taliban convoys have also been deployed through the city’s streets, a CNN team witnessed. The convoys, consisting of two to three pickup trucks with at least six Taliban fighters in each, were seen circling several areas of the city with sirens blaring.
Sporadic gunfire was also heard, at a more intense rate than on previous days.

On Wednesday militants fired into the crowd and beat protesters at a rally in Jalalabad, where demonstrators had removed the group’s flag from the main square, three witnesses told CNN.
And on the streets of Kabul, women who occupied prominent positions in the past two decades continue to fear for their safety.

Afghans fly the national flag in Kabul on Thursday, despite the presence of Taliban fighters.

At the capital’s airport, where for days images of frantic Afghans looking for escape have underscored the dramatic unraveling of two decades of US involvement in the country, crowds are swelling and locals are struggling to get through Taliban checkpoints and into the facility.
The US embassy in the city warned people on Wednesday evening that it cannot ensure safe passage to the airport. The US has evacuated 7,000 people in the past five days, the Pentagon said Thursday.
President Joe Biden, still facing international condemnation for his unapologetic stance on the American withdrawal and the ensuing rise of the Taliban, has suggested US troops could stay past withdrawal deadline to evacuate all Americans.
But he did not make the same pledge for Afghan partners, and locals face a chaotic rush to get themselves onto a flight.

As the final departure of Western forces looms larger, scenes at the airport are becoming more disorderly. The Pentagon admitted on Thursday that US troops are still not being used to retrieve Americans from elsewhere in Kabul, saying it was prioritizing securing the airport.
Defense Secretary Lloyd Austin said that “we don’t have the capability to go out and collect the large numbers of people,” adding that he would “draw a distinction between extracting someone in an extreme condition or circumstance versus going out and collecting up large numbers of American citizens.”
The US Embassy in Kabul has instead notified Americans who want to leave the country, as well as locally employed staff and a “segment” of those with an Afghan Special Immigrant Visa (SIV) “to consider traveling to the airport” overnight, State Department spokesperson Ned Price said Thursday.
Price said he had seen reports of people not able to access the airport, telling reporters that “every report of someone unable for whatever reason to reach the airport is something we take very seriously.”
Yet Price said the US government does not “have the resources to go beyond the airport compound” to facilitate evacuations at this point.
Asked if the United States had approached other nations about assisting with such an effort, Price told reporters, “you will be hard pressed to find a country that has the capacity on the ground, if any such country exists, in a position to do that.”
But there has been “no decision to change” the August 31 deadline to withdraw all US troops from Afghanistan at this point, Pentagon spokesman John Kirby said Thursday, adding that “if and when there is a decision to change that” deadline, further conversions with the Taliban would need to take place
Images of mothers handing their babies to British soldiers over barbed wire outside the airport have emerged on social media in recent days, highlighting the dire outlook for many Afghans trying to leave Kabul.
The UK’s defense minister Ben Wallace said Thursday they cannot take unaccompanied minors, and that those parents would have had to force their way through the crowds to be reunited with their children. He added it has been “very difficult” for troops “dealing with some desperate people, many of whom are just wanting to leave the country.”
Wallace claimed that the Taliban were “letting our people through” to the processing center “which is good news,” but people CNN spoke with on the ground have reported severe difficulties in accessing the airport, with several saying they were turned away despite having the correct paperwork.

An Afghan child sleeps on the cargo floor of a U.S. Air Force C-17 Globemaster III on Sunday, in a photo released by the US Air Force. Afghans have struggled to get through desperate crowds outside Kabul’s airport this week.
In total 12 people have been killed in and around the airport since the Taliban took control of the capital on Sunday, Reuters reported Thursday, citing NATO sources and Taliban officials.
The deaths were caused either by gunshots or stampedes of people trying to get into the airport in the hope of boarding an evacuation flight, Reuters reported. CNN has been unable to independently verify the reports.
A Dutch evacuation plane was forced to leave with no passengers on Wednesday, while the European Union’s top diplomat, Josep Borrell, has lamented that the bloc cannot rescue all Afghans seeking a way out.
“These people have loyally promoted and defended EU interests in Afghanistan over many years, it’s our moral duty to protect them and to help to save as many people as possible,” he said, conceding: “We cannot take all Afghan people out of the country.”
(CNN)