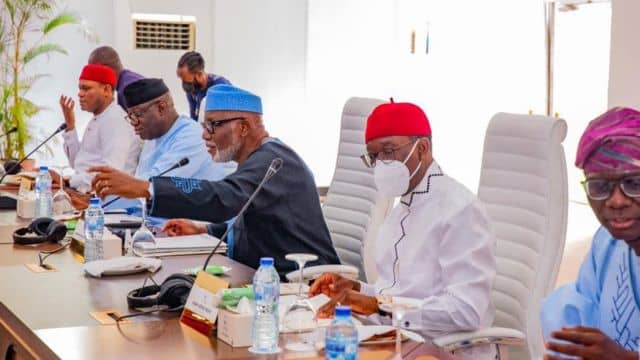 The Southern governors and groups expressed shock at the decision of the Federal Government to go ahead with the plan to review the establishment of grazing sites across the country despite the stiff opposition to it by the people of Southern Nigeria.

Seventeen southern governors, under the aegis of the Southern Governors’ Forum, had on May 11 met in Asaba, Delta State capital, to deliberate on the prevalent insecurity and other issues affecting the region.

In a 12-point communiqué after the meeting, dubbed the Asaba Declaration, the forum, chaired by Ondo State Governor Rotimi Akeredolu (SAN), resolved that open grazing of cattle be banned across Southern Nigeria.

The governors said the incursion of armed herders and bandits into the southern part of the country had presented a severe security challenge such that citizens were no longer able to live their normal lives.

Hence, in their communiqué, they resolved that open grazing of cattle be banned across Southern Nigeria, decrying the increased killings and rape of women perpetrated by armed herdsmen in the region.

“Given this scenario, it becomes imperative to enforce the ban on open grazing in the South (including cattle movement to the South by foot),” the governors declared.

Eight weeks after their meeting, the 17 state governors again met in Lagos on July 5 to reaffirm their stance on the Asaba Declaration after a wave of criticisms by the Presidency, Senate President Ahmad Lawan, and the Attorney General of the Federation/Minister of Justice, Abubakar Malami.

However, unbothered by the southern governors’ opposition to the revival of old grazing routes or sites, President Buhari on Thursday approved the recommendations of a committee to review with dispatch 368 grazing sites in 25 states in the country to determine the levels of encroachment.

The Senior Special Assistant to the President on Media and Publicity, Mr Garba Shehu, disclosed this in a statement titled, ‘President Buhari approves review of grazing reserves in 25 states.’

Buhari’s directive was after his approval of the recommendations of a committee chaired by his Chief of Staff, Prof Ibrahim Gambari.

Among others, the committee recommended the collection of field data on 368 grazing reserves across the 25 states to assess the level of encroachment and encroachers, stakeholder engagements, and sensitisation.