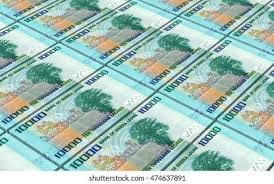 Sierra Leone will lop three zeros from its currency and print smaller bills that fit into a regular wallet ,as the nation battles runaway inflation, the central bank said on Thursday.

The new leone, as the new currency will be called, will be valued at around 10 to the US dollar, Kelfala Murana Kallon, the bank’s governor, told reporters.

“In the not too distant future, Sierra Leone will get a new currency that will be called the new Leone,” Kallon said.

“Our current currency is too big to fit into a wallet and we spend too much money printing oversized banknotes,” he added, although he gave no date for the change.

Sierra Leone hopes to regain export competitiveness and rein in inflation which have eroded the face value and purchasing power of the currency.

Although inflation has been receding in recent years, it was still running at 13.4 percent in 2020, according to World Bank estimates.

Despite its riches in diamonds and other commodities, the former British colony of 7.5 million people is among the world’s poorest countries.

Efforts at rebuilding were set back by the Ebola epidemic of 2014-2016, a fall in world commodity prices and the coronavirus epidemic — all of which have disrupted trade and investment and hit exports.

“Our economy is not doing well, the cost of rice, flour and sugar are going up daily, we need investors to develop the agriculture and mining sectors to boost the economy,” said Abubakr Kamara, a restaurant owner in Central Freetown.

Central Bank Governor Kallon said that the new currency notes will reduce transaction costs as well as giving a “psychological boost to the citizens”.