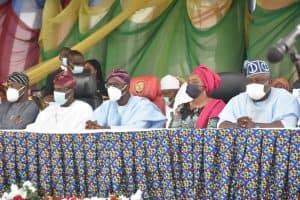 From Left, Lagos State Head of Service, Mr Hakeem Muri-Okunola; Deputy Governor, Dr Obafemi Hamzat; Gov. Babajide Sanwo-Olu, his wife Dr Ibijoke and Speaker Lagos State House of Assembly, Mr Mudasiru Obasa, during the swear-in of the newly elected local government chairmen at Lagos House, Ikeja on Tuesday
⌊”As we all know, public office is a position of trust that no one holds forever – we hold it for a time and then we pass on the baton to others.

Speaking during the swearing-in ceremony at Lagos House, Ikeja, Sanwo-Olu urged the new council executives to always put the residents first in all that they do because they were elected to serve the people.

Sanwo-Olu said that the new council bosses had a responsibility to ensure that they do not let the people down in any way or form.

According to him, the only way they can reciprocate this trust is to give their best and ensure that the welfare and wellbeing of the people take precedence in all their decisions.

”Right from your first day in office, I implore you to start thinking about the kind of legacy you would like to leave behind when your tenure ends.

”As we all know, public office is a position of trust that no one holds forever – we hold it for a time and then we pass on the baton to others.

”Let me use this opportunity to emphasise the need for continuity and progress in governance. I urge you all to ensure that you build on the good legacies laid by your predecessors.

”Also, ensure that you surpass the legacies and the expectations of the people who have very enthusiastically elected you,” he said.

Read Also: 2023 Presidency: No Hand Over Agreement Between Buhari And Tinubu – Okechukwu

The governor said that this was not the time to alienate some people because of political differences, but time to give and make all citizens feel good governance.

He said that the local government chairmen were assuming their roles at a very challenging time in national life, due to the disruptive coronavirus pandemic, which had disastrous consequences for jobs, livelihoods and economies.

According to him, residents will continue to clamour for and expect good governance; policy-making and implementation that will enable them to navigate these difficult times and emerge from it.

”It is our responsibility and our burden as leaders they have elected to live up to their expectations. I, therefore, say to you that they are expecting much from you.

”More than ever before, achieving this requires cooperation among all levels and arms of government.

”It is expected that you will work in unity with other tiers of government to bring to bear the dividend of democracy to the people in all the relevant areas.

”These are in areas of construction and maintenance of inner roads, waste management, primary education, healthcare, security and welfare programmes that touch the lives of people.

”Let me assure you of our commitment at the state government level. We will continue to provide you with the much-needed support to discharge your responsibilities,” he said.

In his welcome address, Dr Wale Ahmed, the Commissioner for Local Government and Community Affairs, said that the chairmen’s victory at the polls was a testimony to the solidity, strength, internal democracy and unity of APC.

Ahmed said that now that they had clinched the coveted seats, work should begin in earnest.

”Your re-election/election is another call to a season of service, dedication and selflessness to our people.

”Therefore, the task ahead of you is to sustain or even surpass the tempo of performance of previous administrations in your respective council areas,” he said.

The Chairman, Igbogbo-Bayeiku LCDA, Mr Sesan Daini, who spoke on behalf of the newly sworn-in 114 chairmen and vice chairmen, pledged that they would key into the T.H.E.M.E.S agenda of the Lagos State Government.

”On behalf of the whole newly sworn-in chairmen, we will not disappoint you and I promise again that we will key into the T.H.E.M.E.S agenda of Mr Governor.

”I want to assure the governor that we are going to give you total support and cooperation. We will give guidance to our councillors that are going to work with us.

”We are going to be a team that you will never regret supporting. I promise total support and loyalty,” Daini said.