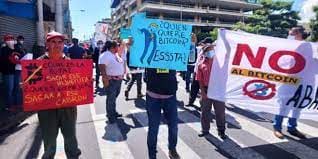 San Salvador, El Salvador – Bitcoin is now officially legal tender in El Salvador, but the country’s landmark adoption of the world’s largest cryptocurrency got off to a less than auspicious start on Tuesday.

“We have disconnected it while increasing capacity of the image capture servers,” tweeted President Nayib Bukele. “The installation problems that some people had were for that reason.”

As the government grappled with technical problems, a small but growing group of people opposed to the new Bitcoin law turned out to protest it in the capital San Salvador.

Among them was University of El Salvador student Marvin Rivera. “I want to be clear that I don’t oppose Bitcoin,” he told Al Jazeera, holding a sign that read ‘No to Bitcoin, No to Dictatorship’.

“What we are against is the process that has happened and that we never had any say in this,” he said.

That sentiment has been echoed by both opponents and supporters of El Salvador’s Bitcoin adoption. The common denominator among the divided population appears to be a lack of knowledge about the world’s biggest cryptocurrency and how the new Bitcoin law will be implemented.

Glitches and doubling down

Bukele tweeted on Monday evening around 7:30pm ET (23:00 GMT) that the nation had bought 200 Bitcoins, a doubling down that brought its total holdings to 400. At the time of the tweet, that investment was worth just shy of $21m, according to CoinMarketCap. By 11am ET (16:00 GMT) Tuesday, the value had fallen to around $17.8m before clawing back some of the loss.

The volatility of Bitcoin and other cryptocurrencies is so infamous it’s given rise to the acronym HODL – hold on for dear life. It’s also why 22-year-old student Daniela Romero joined the anti-Bitcoin law protest on Tuesday.

“If we don’t understand Bitcoin, then people will lose money when the price drops,” she told Al Jazeera. “We need a lot more education or people will be taken advantage of.”

President Bukele stunned the crypto and wider world in June when he announced that his nation would adopt Bitcoin as legal tender alongside the United States dollar, which has been the currency in the tiny, indebted central American nation since 2001.

With just 90 days to prepare for the historic adoption, teething problems surfaced early on Tuesday when the much-anticipated Chivo digital wallet disappeared from app stores.

Chivo will allow people to use either Bitcoin or US dollars and transfer between the two without fees. The newly installed Chivo ATMs around the city were also not working, and there was confusion about when the app would be available again or when ATMs would be functional.

Kevin Moreno, 30, was waiting in line to use a new Chivo ATM late on Tuesday morning. He had already downloaded the app and received the $30 sign-up bonus in Bitcoin that the government is offering as an incentive to spur adoption.

“I’m mostly just curious; I like to try new things,” Moreno told Al Jazeera. Later in the day, he said he would help his boss learn how to accept payments in the nutritional supplement shop where he worked.

Meanwhile, the president took to Twitter to calm his critics and do some high-level customer service. “Could you please try to register and post in the comments if there are any errors or if the whole process works fine?” he wrote.

Bukele’s tweet storm Tuesday was in Spanish, though he often tweets about Bitcoin in English, where his target audience seems to be the international Bitcoin community. He has pitched El Salvador as a destination for both Bitcoin companies as well as individuals, promoting no capital gains taxes on investments in the cryptocurrency, no property tax and even offering residency to any foreigner who spends three Bitcoin in the country.

Despite the president’s boosting efforts, there is even uncertainty about how the law will function among the country’s small but growing expat community of Bitcoin supporters.

However, some Salvadors aren’t waiting for official clarity and are already using Bitcoin.

Napoleon Osorio, a 35-year-old Uber driver, has been using the cryptocurrency since February after he visited the town of El Zonte and locals explained it to him. El Zonte, also known as Bitcoin Beach, is a village on the Pacific Coast that, aided by a large donation from an anonymous investor, has been using Bitcoin widely for two years. It is cited by Bukele as a proof of concept for the whole nation.

“I’m teaching it to my family now, too,” Osorio told Al Jazeera, adding that his aunt sends the family small amounts of money each month from Los Angeles in the US, and that they plan to start using Bitcoin for this purpose now.

According to the World Bank, remittances made up nearly a quarter of El Salvador’s gross domestic product last year. Bukele claims that switching to Bitcoin, which enables people to send money nearly instantly and nearly for free, can save the nation $400m per year and boost its economy.

Besides saving fees, Osorio has another interest. “We won’t have to travel to the store every time; now I can be in bed and still receive money,” he joked. “But it’s more than that. The price might go up or down, but Bitcoin gives me more power. We don’t need permission to send money anymore.”

The ability to have more control over finances resonates with many in El Salvador, with people often citing capital controls in nearby Nicaragua or Venezuela.

While around 70 percent of the country is unbanked, most people have a mobile phone.

A popular president, an unpopular law

Down the street from the morning protest, Marta Duran sold pupusas, a popular Salvadoran street food made from cornmeal.

“As soon as I can, I’ll download Chivo,” she told Al Jazeera. “I don’t know much about it, but I trust Bukele. We can’t be stuck in the past.”

Bukele remains wildly popular even though his Bitcoin law may not be.

According to an August poll by Central American University, 65 percent of the population opposes the law. Yet the same survey also gives President Bukele an approval rating of 76 percent.

Also this week, the nation’s top court ruled that a president can serve two consecutive terms, making Bukele eligible to rule the country until 2029. The judges behind the decision include ones appointed by the president’s party in May after existing justices were dismissed.

The morning protest had more journalists than protesters, but by 10am the crowd had swelled and had begun marching. Some broke away to spray paint anti-Bitcoin graffiti, and others threw fireworks.

But Bukele was also busy on Twitter, demonstrating his faith in the cryptocurrency even as it sold off on Tuesday morning.