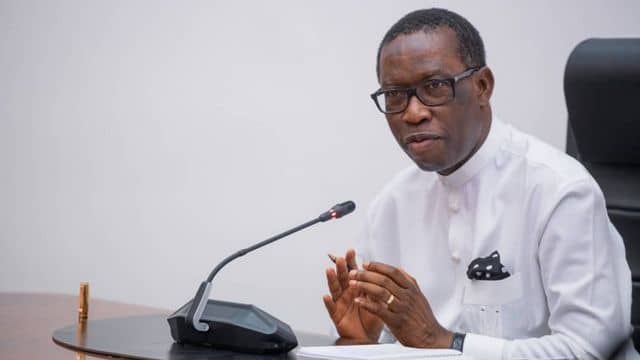 ⌊There’s been no reported death following vaccination; and we have all taken it; our first and second doses and we are well.

Gov. Ifeanyi Okowa of Delta has urged Nigerians to stop having doubts about the safety of the COVID-19 vaccines.

Okowa fielded questions from State House correspondents after a private meeting with Vice President Yemi Osinbajo on Tuesday at the Presidential Villa, Abuja.

The News Agency of Nigeria (NAN) reports that the World Health Organisation (WHO) recently warned that COVID-19 Delta variant was fast spreading around the world.

NPHCDA affirmed that the Oxford-AstraZeneca vaccine was 88 per cent portent against the Delta variant detected in the country.

Okowa said that the vaccines had been proven to be harmless with no reported case of death in Nigeria.

According to him, out of 3.94 million doses of Oxford- AstraZeneca vaccine distributed in Nigeria, Delta got about 95,000 doses which had been used.

“That has been fully utilised; both in the first and the second dose; actually, in the country, they have done well.

“As a result of the anti vaccine campaign, the kind of messages they pass out, a lot of people started having some level of hesitancy but all of the doses we have in state were taken up.

“And across the nation, as of the last meeting we had last week Thursday, I chaired the NEC sub-committee interfacing with the Presidential Task Force,  we didn’t really lose anything.

“As of that Thursday, one will say, few days for it to expire, we had only nine vials; so that means we are not going to lose anything.

“But we have to up the campaign as we are expecting many more vaccines at the end of July, first week of August; which is going to run into a few more millions; so we just have to keep the campaign going.

“I want to reassure Nigerians that the AstraZeneca vaccine and all other vaccines, have been proven very safe; the adverse effect following vaccination actually has been very minimal.

“There’s been no reported death following vaccination; and we have all taken it; our first and second doses and we are well.’’

The governor said that efforts were being made to boost the Internally Generated Revenue (IGR) of the state amid dwindling revenue at national and state levels due to COVID-19 pandemic.

He said his administration was trying to get people into the tax bracket while being mindful of the impact of such on the populace.

“And to that extent, you are careful so that you don’t do overtaxing of the entire populace and therefore further dig down on the economy and cause a situation where many families are not able to feed.

“All the same, we try to bring a lot into the tax net; we are trying to be very responsible in our approach to that.

“Because of the COVID-19, 2020 truly actually destroyed a lot of businesses; we are also doing a lot of things to try to support some of those businesses.

“We are also growing a lot of youth entrepreneurs in the state through various programmes; so those ones can come in into tax bracket.’’

Okowa said that boosting the state’s IGR might not be as much as expected because of the impact of the COVID-19.

On security, the governor said that there was need for a lot of collaboration among the governors across the nation.

He said there was also need for the Federal Government to work closely with the governors in tackling insecurity.

“All the governors have also realised that they need to work with the communities, the vigilante groups that come in various names and I believe that it is going to help each and every one of us out.

“There are different kinds of insecurity across the nation; the kidnappings,  the farmers-herders clashes which has created a lot of problems and we are beginning to get worried that if it is not curbed, we may get into a situation where we will begin to have shortage of food,’’ he said.

According to him, food insecurity itself is something that people cannot bear. (NAN)