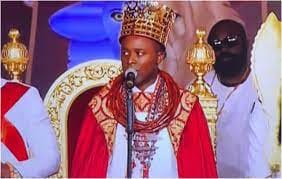 Former President Olusegun Obasanjo has urged the newly crowned Olu of Warri, Ogiame Atuwatse III to deepen his relationship with God as he begins his reign.

Obasanjo gave the advice during the coronation thanksgiving service of the monarch at his palace in Warri on Sunday.

The former President also prayed for the peace and unity of the kingdom.

Ogiame Atuwatse III was crowned the 21st Olu of Warri on Saturday at Ode-Itsekiri, ancestral home of the Itsekiris in Warri South Local Government Area of Delta State.

“With the way you have started, I believe you will live up to the responsibility that God has given to you,” Obasanjo said.

“The second: please be very close to God. Whatever situation you may find yourself, please be close to God and God will make way for you even when and where people may think there is no way.”

The Governor of Delta State, Ifeanyi Okowa also charged the Olu of Warri to unite the Itsekiri nation.

“It is a time for healing,” Okowa said. “It is a time, Your Majesty, to ensure that the entirety of the kingdom comes together. Whether people are stubborn or not, we must still extend the olive branch to them and I know that it will be well with the Itsekiri nation in your time.

“You have a lot of work to do, not only in the Itsekiri nation but across our nation Nigeria. The nation-building that we spoke about this morning, we all have a role to play; but as the Olu of Warri, you have a lot of roles to play; and therefore we cannot afford any distractions at home, so that the larger role in the nation would be provided enough time to have your presence in that nation-building.”