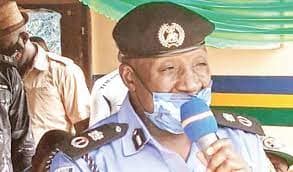 A newlywed woman, Sandra Broderick, is in tears over the mental state of her husband, Omesa Broderick, allegedly tortured by some policemen attached to B Division, Warri, Delta State.

While Omesa remains unstable after reportedly undergoing a brain surgery occasioned by the torture, the distraught wife lamented that erring cops identified as Ndubuisi, Felix and Felix Ezesobo, had yet to be brought to book.

Sandra, in a video that went viral on Wednesday, recounted how the policemen allegedly brutalised her husband, a tricycle rider, and left him for dead. It was learnt that the incident happened in August close to the police station.

She said the Divisional Police Officer, B Division, initially identified the power-drunk cops but later developed cold feet on the case and dared her to report the matter to higher authorities.

In the clip, the husband is seen lying helplessly, clutching at Sandra who narrated his ordeal amidst intermittent sobs.

She said Omesa sustained internal head injuries and underwent a brain surgery, noting they had spent “almost N5m to take care of him.”

The woman stated further that the policemen after beating her husband to a pulp, impounded his tricycle and kept it at a filling station, adding that it was a good Samaritan who came to his rescue.

“They were not even on duty on the day the incident happened close to B Division,” she narrated amid tears. “They went to change their uniforms, beat up my husband and left him around 7pm. It was around 9pm that somebody rescued him and called me with his phone.”

She stated that Omesa was rushed to the Central Hospital, Warri as he bled profusely through the mouth and nose, adding that he was referred to another hospital for a brain surgery.

“The surgery there (at the hospital) was expensive so we had to go to another hospital, Brayans,” she noted, before breaking down in tears. “That is where we did the operation.”

“This is him,” she continued after wiping off tears, patting her unconscious husband.

“The thing (injury) is affecting his brain,” Sandra added, before betraying emotions again. “He is behaving somehow and he is the breadwinner of the house. We just got married not long after. People should help us.”

She said the family had been bearing the cost for Omesa’s treatment without support from the police who she accused of shielding the perpetrators.

She stated, “I don’t have anybody. They have been pushing the matter here and there. Till now, (we did) not even (get) a penny from the B Division, the DPO or the police; nothing. They left it all for us, saying they will bring them (the policemen) out.

“Whether they have released them, I don’t know. I don’t know what is going on. They left my husband like this. You can see him. I, my mother-in-law and my father-in-law met with the DPO. He identified them as Ndubuisi, Felix and Felix Ezesobo. They are not bringing anybody out. The DPO said I can report to Buhari if I like.

“I asked for the surname of these people, they are hiding them. I reported to the Committee for the Defence of Human Rights. They are the ones that have been taking up the matter, looking for them (the policemen).”

But the Police Public Relations Officer in the state, DSP Bright Edafe, denied that the policemen were being shielded by either the DPO or the command, claiming that the cops were undergoing an orderly room trial.

He said, “The DPO has been constantly checking on her and her husband. How possible that the DPO who informed the command and transferred the case to the State CID would tell her that (to report to Buhari)?