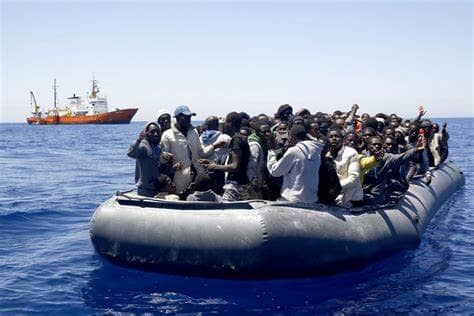 The International Organisation for Migration (IOM) said over 42,761 people from sub-Saharan African made move to cross to Europe through the central Mediterranean route.

Mr Frantz Celestine, IOM’s Chief of Mission said that of the number, 29,000 crossed to European shores.

Celestine, who spoke in an interview with the News Agency of Nigeria (NAN) in Abuja on Sunday, said that 13,000 were returned by the Libyan Coast Guards, while 761 persons lost their lives in the attempt to cross.

He pointed out however that the number did not take into account the thousands of people who were caught and locked up in detention facilities.

“We have seen an increasing number of people migrating because of the economic pressure. We have seen a high level compared to 2020, of people being pushed back by the Libyan Coast Guards.

“We have seen more and more people are dying at sea.

“This year, so far, more than 29,000 people have made it to the European shores using the central Mediterranean route

“They have made it to the shores, whether successful or not is how you view it, if getting their foot on the shores is defined as successful, then yes, we have had more than 29,000 people that have made it.

“The tragic side of it, one person dying in the process of crossing is one too many. But what we have seen so far is 761 have died in the process, and there are thousands and thousands of people who have not made it, people who are currently in detention.

“I think there are 13,000 that were caught and returned by the Libyan Coast Guards. These numbers are for May 30th.

“So for all those who have made it, we have seen an increasing number of people being returned. In fact, the number of them that have been returned is higher than what we have seen in 2020.

“We expect more and more people to be in that condition over time.’’

Celestin stressed that there were a lot of push factors compelling people to embark on the journey regardless of its inherent dangers.

He pointed out that the focus should be to push forward to mitigate the number of people migrating as well as the level of suffering in that process.

He said that it was not going to stop unless the drivers are removed or mitigated, and these drivers are hardship, conflict, disasters, and the fact that we have more people looking for jobs and a lot of people under-employed.

“So the combination of unemployment and underemployment will definitely push people forward.

“ You can tell them as much as you want, but if you don’t find something to keep them in place, they will migrate,” he said.