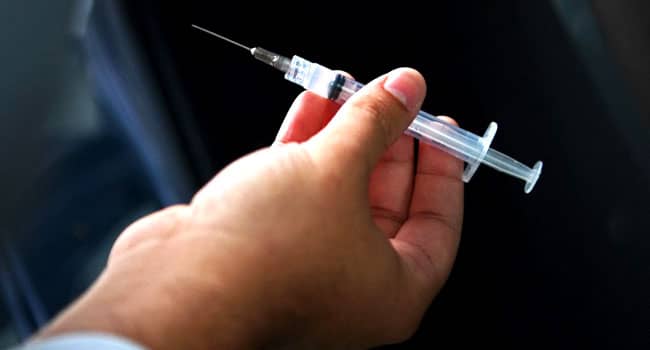 ⌊ In this file photo taken on February 06, 2021 a health worker administers a vaccine dose at a drive through vaccination center at the Sambodrome Rio Carnival venue, in Rio de Janeiro, Brazil. CARL DE SOUZA / AFP

A man, Stephen Harmon, who ridiculed COVID-19 vaccines on his social media platforms has died from the disease.

The Californian passed on following a month of battle with the virus. Stephen was a critic of vaccines and made a number of jokes about not getting the vaccination.

“Got 99 problems but a vax ain’t one,” Stephen, a member of Hillsong megachurch tweeted in June.

“Biden’s door-to-door vaccine ‘surveyors’ really should be called JaCovid Witnesses. #keepmovingdork,” he noted in another tweet on July 8. “IF YOU’RE HAVING EMAIL PROBLEMS, I FEEL BAD FOR YOU, SON. I GOT 99 PROBLEMS BUT A VAX AIN’T ONE!”

BBC reports that the 34-year-old died on Wednesday in a hospital outside Los Angeles where he was treated for COVID-19 as well as pneumonia.

“Ben has just passed on to us the devastating news that our beloved friend, Stephen Harm

on has passed away from Covid. Heartbreaking,” Brian Houston tweeted on his handle.

“He was one of the most generous people I know and he had so much in front of him,” he added in another post.

⌊ In this file photo taken on March 09, 2021 a medical worker holds a syringe and a vial of the British-Swedish AstraZeneca/Oxford vaccine during a vaccination campaign at the National Museum of Science and Technology Leonardo Da Vinci. Miguel MEDINA / AFP

A few days before he died, he began to document his struggles to stay alive.

“Please pray y’all, they really want to intubate me and put me on a ventilator,” he said, posting photos of himself in his hospital bed.

“Don’t know when I’ll wake up, please pray,” he wrote in his last tweet where he said he had gone under intubation but insisted he would reject the jabs.

His faith, he argued, would protect him and had before his death shared memes.