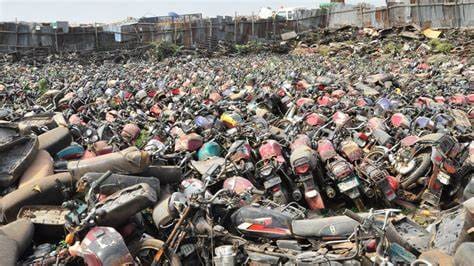 No fewer than 5,200 motorcycles were impounded by Lagos State Environmental and Special Offences Unit (Task Force) between January and June, the News Agency of Nigeria (NAN) reports.

Head, Public Affairs of the unit, Mr Femi Moliki, disclosed this in an interview with NAN on Monday.

Moliki said that all the impounded motorcycles were plying different restricted routes in the state and endangering the lives of other road users, despite several warnings by the government.

He said the task force Chairman, CSP Shola Jejeloye, led the operation that the 104 motorcycles impounded on Monday at Second Rainbow, Cele and Okota areas of the state.

Moliki quoted Jejeloye as saying that the seizure was in line with enforcement of the State Traffic Law, adding that it was also aimed at halting the flagrant abuse of traffic laws by motorcyclists.

“Government is concerned with the recklessness of motorcyclists on restricted routes. It has, therefore, become necessary to help them by saving their own lives and those of other road users.

“Government will not fold its arms and allow motorcyclists create chaos for other road users on prohibited routes,” Jejeloye reportedly said.

Moliki said that the operation had become imperative for government to prevent an increase in the crimes perpetrated by motorcyclists within the metropolis, particularly in prohibited routes.

He said that the agency would continue the clampdown on recalcitrant motorcyclists plying restricted routes in order to ensure the security of lives and property.

Moliki, however, called for the support of the people of the state, saying that they should desist from boarding motorcycles in prohibited areas.

According to him, the traffic law is in the best interest of all.