Emir of Kajuru Regains Freedom After One Night In Kidnappers’ Den 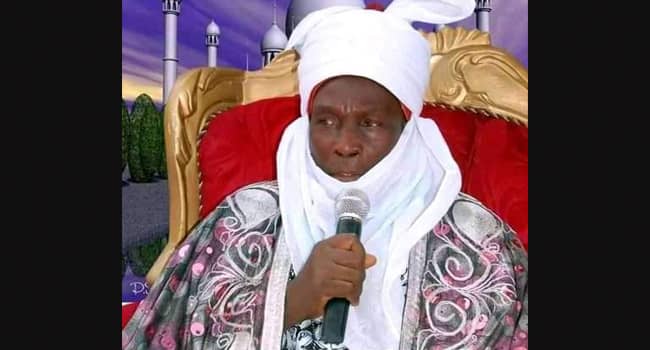 He was released at about 5 pm, after spending a night in the custody of the bandits. Although the abductors had demanded a N200 million ransom, it is unclear if any money was paid for his release.

A top official of the Kajuru council area as well as the spokesman of the Kajuru Emirate council, Dahiru Abubakar confirmed the release of the 85-year-old traditional ruler to Channels Television.

He said Emir Adamu was released at an undisclosed location within Kajuru Local Government Area of Kaduna and is in good condition.

But 13 other members of his family who were kidnapped alongside the Emir are still in captivity.

The bandits had swooped on the Emir in the early hours of Sunday morning, just six days after the abduction of 121 students of Bethel Baptist school in neighboring Chikun Local Government Area.

It was gathered that the gunmen numbering over 200 stormed the emirate, firing gunshots, before proceeding to the Emir’s palace and taking him and 13 members of his family away.

Hours later, the bandits contacted the emirates and demanded a ransom of N200 million to facilitate the monarch’s release.

According to the spokesperson of the Kajuru Emirate Council, the bandits also gave assurances that all the victims are in good condition and were not being molested.

Kaduna State has seen a spike in mass abductions with bandits equally having a field day in the northwestern state.

The abduction of the monarch was the latest in the kidnapping of high-profile personalities in the state.

Despite the heightening crime rate in the state, Governor Nasir El-Rufai has vowed not to negotiate with and pay ransom to abductors, threatening to sanction anyone who follow such path.

“We have a feeling that the renewed attacks in Kaduna are not unconnected to the position that we have taken as a government that we will not negotiate with criminals,” the governor said in April.

“We will not give them any money and they will not make any profit from Kaduna; anyone that comes to Kaduna will not get a penny from the state government, except he will get a bullet instead.”