Kabul Evacuation Is One Of Largest, Most Difficult Airlifts In History – Biden 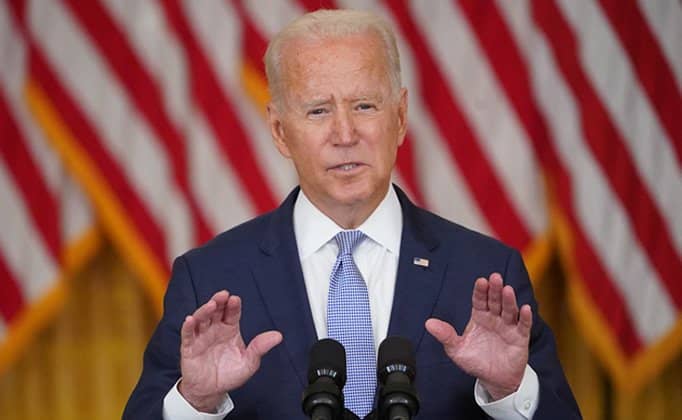 U.S. President Joe Biden gestures as delivers remarks on the U.S. military’s ongoing evacuation efforts in Afghanistan from the East Room of the White House on August 20, 2021 in Washington, DC. Anna Moneymaker/Getty Images/AFP

US President Joe Biden said Friday he could not guarantee the outcome of emergency evacuations from Kabul, calling it one of the most difficult airlift operations ever, but added he would mobilize “every resource” to repatriate Americans.

“This is one of the largest, most difficult airlifts in history,” Biden said in a televised address from the White House, highlighting the dangerous elements of coordinating a mass evacuation while being surrounded by Taliban forces, who took over the Afghan capital on Sunday.

“I cannot promise what the final outcome will be, or… that it will be without risk of loss,” he said of the chaotic exit from Afghanistan after nearly 20 years of war and rebuilding.

“But as commander in chief, I can assure you that I will mobilize every resource necessary” to conduct a thorough evacuation, Biden added.

“Let me be clear: Any American who wants to come home, we will get you home.”

The president said US forces have airlifted 13,000 people out of Afghanistan since August 14, and 18,000 since July, with thousands more evacuated on private charter flights facilitated by the US government.

Earlier this year, Biden — building on his predecessor Donald Trump’s 2020 call for a withdrawal from Afghanistan — imposed a deadline of August 31 for a full exit.

Asked whether he could get all Americans out by that rapidly approaching date, Biden said he aimed to, but warned he would not second guess the judgment of military commanders on the ground.

“I think we can get it done by then, but we’re going to make that judgment as we go,” he said.

Biden said this week he had believed it was impossible to leave Afghanistan “without chaos ensuing” — a scenario that has played out in recent days with thousands of Afghans, including many who worked as translators or otherwise aided US operations, crowding outside the gates of Kabul airport.

He also said his administration has been in “constant contact” with the Taliban to coordinate and facilitate the safe evacuation of US personnel.

With the haphazard retreat making global headlines, Biden stressed he has seen “no question of credibility from our allies around the world” regarding the conduct of the American withdrawal, adding US forces were in close operational contact with NATO on the evacuation operation.