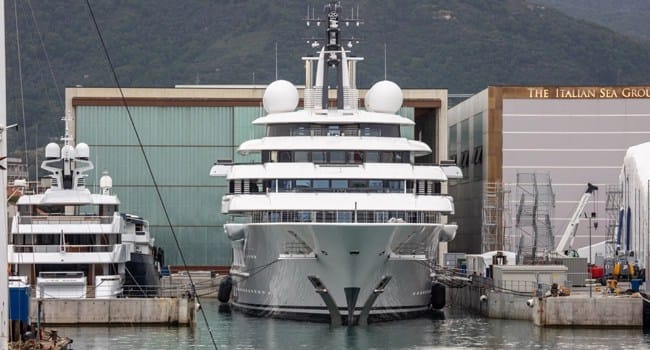 A view shows the multi-million-dollar mega yacht Scheherazade, docked at the Tuscan port of Marina di Carrara, Tuscany, on May 6, 2022, after its basin was reflooded.  Federico SCOPPA / AFP

The Italian authorities on Friday impounded a mega yacht at the centre of a mystery over its ownership as speculation swirled it might even belong to the Russian president.

“Scheherazade”, worth an estimated $700 million, has been the subject of a probe into its ownership by Italy’s financial police.

The Italian probe has helped “establish significant economic and business links between the person who officially possesses the Scheherazade and eminent people in the Russian government,” as well as Russian figures sanctioned by the West following Russia’s invasion of Ukraine, the Italian Ministry of Economy and finance said in a statement.

Following the probe, “the minister of Economy and Finance, Daniele Franco, has signed a decree impounding” the yacht, the statement added.

It had been berthed for several months for maintenance work at a shipyard at the Marina di Carrara, within the western seaside town of Massa.

But the yacht was back on the water and seemed about to set sail on Friday, an AFP photographer said before the Italian government statement was issued.

YOU MAY READ ALSO: Russian Oligarch’s Yacht Seized In Fiji On US Request

A view shows the multi-million-dollar mega yacht Scheherazade, docked at the Tuscan port of Marina di Carrara, Tuscany, on May 6, 2022, after its basin was reflooded.  Federico SCOPPA / AFP

But the mystery remains unresolved: who does “Scheherazade” belong to? A Russian oligarch? Vladimir Putin?

Built by Germany’s Luerssen in 2020, the 140-metre yacht features two helipads, a swimming pool, and a movie theatre, according to the SuperYachtFan website, which researches yachts and their owners.

Italian police had said they were doing their best to identify the owner.

“It’s not always easy to attribute ownership” of a yacht, a source close to the Italian probe told AFP in late March.

The same source said earlier Friday there was “nothing new” in the investigation.

Researchers at the anti-corruption foundation of Russian dissident Alexei Navalny link the yacht to Putin.

They cited a crew list in their possession that included several members of Russia’s federal protective service, charged with Putin’s security.

But the Italian Sea Group said in a statement the yacht was “not attributable to the property of Russian President Vladimir Putin”.

The shipyard’s owner said its assessment was based on “the documentation in its possession and following the findings of the checks carried out by the relevant authorities”.

This blog post may interest you: 7 Forms Of Home Security Measures With A Difference