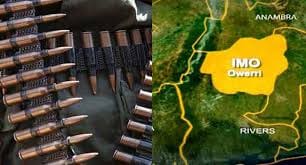 For months that chaos and anarchy reigned in Imo State, unprecedented police and military brutalities that led to alleged extrajudicial killings of unarmed citizens were reported. TESSY IGOMU was in Owerri to trace victims of the reported human rights violations. In the first part of her story, she documents, through an on-the-ground reporting, interviews with families of victims, eyewitnesses, videos and pictures, evidence of tales of anguish, trauma and despondency

Chinyere Anyadike cut quite a pathetic sight as she sat on a brown sofa in her living room in a remote part of Naze in the Owerri North Local Government Area of Imo State.

She was still enveloped by the trauma of witnessing the death of her first son, Samuel on May 28, 2021.

The 21-year-old was allegedly shot at Naze Junction by officers of the Nigerian Air Force, attached to the 211 Regiment Group in Owerri.

Chinyere, a trader at the Owerri New Market, was with Samuel when the soldiers allegedly shot indiscriminately at bystanders and motorists.

Based on eyewitness accounts, several persons were allegedly killed and evacuated by the soldiers to an unknown destination.

However, PUNCH Investigations learnt that Samuel’s corpse was among those deposited at the Federal Medical Centre mortuary in Owerri.

It was alleged that the shooting was carried out to avenge the killing of two Air Force personnel killed by unknown gunmen when they went to buy food at the Naze Timber Market on the same day.

The killing of the officers was confirmed by the Imo State Commissioner of Police, Abutu Yaro, in a newspaper report.

o smoke Indian hemp, adding that the presence of security personnel at Naze was to arrest the suspects and to restore normalcy.

These incidents took place few days to the May 30, seat-at-home order given by the leadership of the Indigenous People of Biafra.

Samuel, a 300-level student of the Imo State University was in a commercial bus with his mother and sister, Chijindu, when he was hit by a bullet on the leg.

Scared and in pain, the young man was said to have run out of the vehicle to hide under a parked SUV, but was allegedly dragged out by the soldiers and shot several times.

Chinyere recounted, “Everywhere was calm when our vehicle got close to the timber market by Naze Junction. Suddenly, I heard gunshots and saw soldiers shooting at people.

“My son was shot on the leg, but he ran to hide under a stationary Jeep. The soldiers went after Samuel, dragged and shot him to death.

“I pleaded with them to spare his life. My daughter held one of them but she was pushed away. The soldiers ensured he was dead before leaving. That was how I lost my first son.’’

Continuing, she said, “He was born on May 16 and died May 28, a few days to his birthday. Samuel usually came to the market to help me when he closed from school, and we would return home together in the evening.

The distraught mother said to bury a child was every mother’s worst nightmare and prayed for strength to survive the ordeal.

Father of the deceased, Nnamdi Anyadike, said his son did not deserve the fate that befell him.

He said when he went to the mortuary to see Samuel’s corpse, he saw several bullet wounds.

Crying profusely, he said, “He had three bullet wounds on the chest, three on the abdomen, two on the leg and two on a lap.

“I nearly collapsed when I saw his body and those of others at the mortuary. My life turned upside down on that day.”

Nnamdi accused the army of refusing to release his son’s corpse for burial, lamenting that daily, the mortuary bill kept accumulating.

In an emotional-laden voice, Nnamdi appealed for the release of his son’s corpse for burial.

“I want to bury my son on July 17 and there is already a bill of N54,500 to be paid. All I want is for him to be released and buried peacefully,” he appealed.

On Friday, April 30, after rocking her two children to sleep, Chidinma Chigbu waited endlessly for her husband, Noel, to return from his business place.

However, in a sad stroke of fate, the wait turned into an endless nightmare.

It was gathered that  Noel was on his way home after dropping a friend, when he was allegedly shot by soldiers for violating a checkpoint rule at the Amakohia flyover area in Owerri.

The soldiers, PUNCH Investigations, learnt were deployed in the area from the 34 Artillery Brigade, Obinze in Owerri.

Details that emerged later about the sad occurrence are bloodcurdling.

Noel, fondly called Ziggy by friends, was days away from celebrating his 39 birthday, and died the same day he took delivery of his new vehicle, a white Toyota Camry.

In search of Noel

The search for Noel took PUNCH Investigations to his hometown, Umuocham, Ntu in the Ngor Okpala Local Government Area.

After a long bumpy ride through muddy, deplorable roads that snaked through several autonomous communities, our correspondent located the deceased’s family compound, a lonely bungalow tucked along a narrow dirt path.

Uncle of the deceased, Ernest Amadi, said he had yet to be brought home for burial.

Amadi provided the mobile number of Noel’s elder brother, Tobechi in Owerri. A call was immediately put across and a meeting point agreed on.

PUNCH Investigations later met with a somber looking Tobechi at the poolside of a very popular hotel in Owerri.

Bespectacled and wearing a grey-coloured traditional outfit, his sad demeanour gave away the heaviness in his heart. He gave a heartrending narration about his sibling’s death and the long, hard road traversed to get an elusive justice.

Killed, dumped in a morgue

Tobechi recalled getting a call from Noel’s wife around 10pm on Friday, April 30, that he was not yet back from work.

He noted that it was quite unusual for his brother to stay out late, despite operating a bustling shawarma joint in the heart of town.

Tobechi said Noel’s mobile phone was called repeatedly but it was not answered.

He said at 5.30pm the next day, someone who introduced himself as a police officer working in the control room of the Imo State Police Command headquarters, picked the call and told him to come over.

When Tobechi got there with another of his brother, Chika, he learnt that Noel was allegedly killed by soldiers and his corpse dumped at the FMC mortuary.

He said, “At the police command, Chika identified Noel’s car. I didn’t know that he bought a car but Chika explained that he wanted it to be a surprise.

“We became alarmed and suspected that something grave must have happened when we saw that the vehicle’s rear windshield was shattered. There were blood stains everywhere, especially on the driver’s seat, while the four tyres were deflated.

“It was the deputy commissioner of police in charge of operations that told us that Noel’s car was brought to the command in the early hours of Saturday by some soldiers, who claimed that they shot him for violating their checkpoint rule.

“He showed us his car key, house keys, mobile phone and the sum of N5,400, which were dropped by the soldiers.”

“The police officer said the soldiers initially refused to write a statement regarding the incident, but later scribbled down his purported crime and directed that his relatives should look for him at the FMC.’’

He also requested  authorisation to bury his brother.

Having waited for two weeks without getting a response from the army, Noel’s elder brother went to submit a reminder on May 18, and was told that he should have given the army two months to respond.

On May 22, Tobechi was invited by the Military Police and was told his petition had been sent to the legal section and internal investigation department for prompt attention.

He told our correspondent that the head of the military police, Major Sunny Krigbode, gave him an assurance that the truth would be established through an objective report.

“I was told to write another statement and to bring Noel’s wife and two children to the brigade. Two military police (warrant officers) later went with us to conduct a physical examination on the vehicle,” he added.

PUNCH Investigations learnt that while examining the car, the soldiers made a mental reconstruction of what could have transpired at the checkpoint, when they discovered where a bullet pierced through to hit Noel at the base of the skull.

“The soldiers revealed that it was the same bullet that shattered the back windscreen and that it was still embedded. They concluded that it was fired from the back, if actually Noel violated the checkpoint rule.

“The warrant officers explained that the other two bullet holes found indicated that the soldiers must have opened the door to shoot at him.

“It was at that point that I told them about the involvement of Staff Sergeant Buwa, and they revealed that he was the team leader for the soldiers on duty that day. They said the information would make their work easier,” he added.

Tobechi said after waiting for another two weeks without hearing from the army, he decided to see the brigade commander.

Though he was denied access to the commander for not sending a formal notification, he was later directed to see the chief-of-staff, Lieutenant Colonel Adebayo.

He recounted, “While waiting at the reception, Major Krigbode and the major in charge of the legal and internal investigation unit, walked past me to see Col. Adebayo.

“On their way back, Major Krigbode called me to his office. He advised me to engage the services of a lawyer and a pathologist to carry out an autopsy, so that my brother can be buried. He said Col. Adebayo couldn’t see me, but I insisted on waiting.”

When Tobechi audience was finally allowed to see the Chief-of-Staff, he was told the army could not grant a burial authorisation to him.

He said Col. Adebayo tactically ruled out any soldier’s complicity in his brother’s death, and maintained that investigation was still ongoing.

“He asked if I had considered the possibility that the army might not have killed Noel. He said that a lot was happening in Nigeria and that as a military officer, if he saw a corpse on the road, he was duty bound to take it to the police or mortuary.

“I told him that I won’t buy the narrative that my brother was a gunshot victim taken to the hospital by the soldiers. He also suggested that criminals could have used army uniforms to kill Noel, but I bluntly told him I was finding his suggestions quite insulting.

“The major later revealed that the captain in charge of the operation for that month had been invited to write a statement and that a letter was dispatched to the brigade, demanding the release of the soldiers involved for interrogation.

“He said as the head of the family, I was at liberty to take the decision to bury my brother without getting authorisation from the army. I told him to put it in writing, but he refused. I left after telling him that the family was ready to wait for the outcome of the investigation, even if it takes a year.”

Speaking on why he kept insisting on having a burial approval, Tobechi said he was trying to “avoid pitfalls being dug by the Nigeria Army.”

“I don’t want to bury him, only to have his body exhumed tomorrow. I don’t want the army to accuse me of tampering with ballistic evidence. We want to be sure that Noel didn’t die in vain. We want justice and if in seeking, we are able to address official recklessness and extrajudicial killings, my brother’s soul will rest in peace,” he said.