How To Protect Children Under 12 From Covid-19, According To Fauci 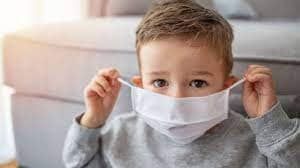 Dr. Anthony Fauci says there’s an important step adults can take to protect children who are too young to be vaccinated against Covid-19.

“The way you protect children who, because of their age, cannot get vaccinated yet is to surround the children — be it friends, family, school teachers, personnel in the school — surround the children with vaccinated people,” the director of the National Institute of Allergy and Infectious Diseases told CNN on Sunday.
More children have needed emergency room visits and hospitalizations in states with lower vaccination rates, according to a recent study from the Centers for Disease Control and Prevention.

In the two-week period in mid-to-late August, ER visits for kids up to age 17 were 3.4 times higher in the states with the lowest vaccination rates and hospitalizations were 3.7 times higher than in states with the highest vaccination rates.
Some states are working to get ahead of the latest surge by getting as many eligible people vaccinated as possible.
The state of Washington, which has an October vaccine mandate for teachers and staff going into effect, is seeing “great news” regarding youth vaccination efforts, according to state health secretary Umair Shah on Thursday.
At least 41% of children between 12 and 15 years old are vaccinated and just under half of the state’s 16- to 17-year-olds are fully vaccinated as well.
“Washington schools have the structure, protocol and people to have successful in-person education,” Shah said.
If the US wants to keep children in the classroom this school year, people have to wear masks, Fauci said. But while some areas have adopted mask and vaccine mandates, others have curbed such measures.
In Kentucky, Gov. Andy Beshear said he’s limited on what he can do because state officials opposed his attempt at a school mask mandate.
“If I had the ability to do it right now, we would have a masking order when you are in public and indoors. We know that’s a proven way to slow the spread of the virus, and ultimately help our healthcare capacity,” Beshear told NBC on Sunday.

(CNN)