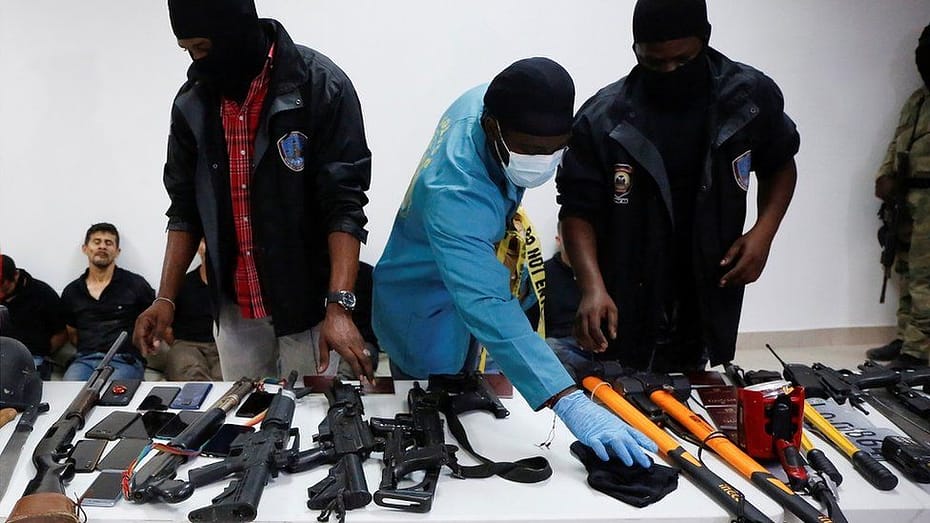 The armed group who assassinated Haiti’s President, Jovenel Moise, were “professional killers” consisting of more than two dozen people, including two American citizens and retired members of the Colombian military, authorities have said. But as more details begin to emerge of the people who killed Moise early Wednesday morning, little is known about the suspected masterminds and their motivation for the attack. Police have so far detained 17 suspects in connection to the fatal shooting and a mass, country-wide manhunt is underway for at least eight additional suspects. Haiti’s Police Chief Leon Charles said three suspects were killed during operations Wednesday, according to Reuters. As the pursuit of those responsible intensifies, details have emerged relating to the arrest of 11 armed men in the grounds of the Taiwan embassy in the capital Port-au-Prince on Thursday.

Taiwan’s foreign ministry spokesperson Joanne Ou told CNN the embassy called local police after security guards reported “a group of armed suspects” entering embassy grounds. She said 11 suspects, described in a separate foreign ministry statement as “mercenaries,” were arrested at 4 p.m. inside the embassy without resistance and only a few doors and windows were damaged. The Taiwanese Foreign Ministry did not give information about the nationalities of those taken into custody, and it is not yet clear if the 11 suspects are among the 17 people detained by police.

With tension high in the capital, crowds of people took to the streets Thursday night, burning cars and demanding justice. For weeks, Port-au-Prince has been reeling from violence which has claimed the lives of many citizens. Moise’s death has left a power vacuum and deepened the turmoil from the violence, a growing humanitarian crisis, and a worsening Covid-19 epidemic. Much of the public anger has so far centered on the foreign nationals arrested in connection to the shooting. Late Thursday, Elections Minister Mathias Pierre told CNN two American citizens were among the 17 people arrested. Pierre identified the men as James Solages and Joseph Vincent, both naturalized citizens from Haiti. Separately, on Thursday, Police Chief Charles said 15 of those detained were Colombian nationals. He paraded some of the suspects at a press conference, alongside an array of military-style weaponry.

In a statement, Colombia’s Defense Ministry said at least six of the suspected attackers were retired members of the Colombian Army and Interpol had requested further information from the Colombian government and the National Police. Colombian National Police Chief General Jorge Vargas added that two alleged attackers, killed in an operation by the Haiti Police, were retired officers of the Colombian Army, and at least four alleged attackers arrested by the Haiti Police were retired soldiers. Speaking to reporters Thursday, US State Department spokesperson Ned Price described the situation in Haiti as “evolving rapidly,” and said the US was preparing to send investigative assistance to the Caribbean country, in response to a request from Haiti’s government.

What’s next for Haiti

It was 1 a.m. when the attackers stormed the President’s private residence in Petion-Ville, a suburb of Haiti’s capital, shooting Moise 16 times, according to former Prime Minister Laurent Lamothe. First lady Martine Moise, who was also shot in the attack, was evacuated to intensive care in a hospital in Miami. Haiti’s ambassador to the United States, Bocchit Edmond, said he believes the first lady is “now out of danger.”Following the assassination, acting Prime Minister Claude Joseph declared a “state of siege” in Haiti, closing the country’s borders and imposing martial law. He appealed to the public to “keep helping us” and “if you see something, say something.”The assassination leaves a huge power vacuum in Haiti. Its parliament is effectively defunct and two men are simultaneously claiming to be the country’s rightful leader. Joseph has not been confirmed by parliament — which has not sat since 2020 — and he was in the process of being replaced by Ariel Henry, whom the President appointed shortly before his death. Henry told the Haitian newspaper le Nouvelliste that “Claude Joseph is not prime minister, he is part of my government.”Moise, 53, was a former banana exporter and divisive figure in Haitian politics. He spent most of the past year waging a political war with the opposition over the terms of his presidency.

For now, it isn’t immediately clear who will replace him. Judge Jean Wilner Morin, President of the National Association of Haitian Judges, told CNN the line of presidential succession in the country is now murky. Throughout his presidency, Moise had repeatedly failed to hold elections at local and national levels, leaving much of the country’s governing infrastructure empty. A constitutional referendum is set to be held in September, alongside the presidential and legislative elections. Municipal and local elections have been scheduled for January 16, 2022, the official electoral calendar also showed. Many in the country had disputed Moise’s right to continue serving in the presidency this year. While the US, United Nations, and Organization of American States supported his claim to a fifth year in office, critics say he should have stepped down on February 7, citing a constitutional provision that starts the clock once a president is elected, rather than when he takes office. Moise, however, claimed his five-year term should end in 2022 because he wasn’t sworn in until February 2017. His inauguration was delayed over allegations of voter fraud during the 2015 election, which led to a presidential runoff that was postponed twice over what authorities called threats and “security concerns.”

This is playing out under the backdrop of extreme violence in Haiti’s capital, with rival groups battling one another or the police for control of the streets, displacing tens of thousands of people and worsening the country’s humanitarian crisis. Meanwhile, the coronavirus pandemic has been worsening in Haiti. UNICEF, the United Nations’ children’s agency, said Thursday that Haiti was the only country in the Western Hemisphere to not have received a single dose of Covid-19 vaccine. At the same time, the country is facing a dire economic situation. Its economy had been contracting even before the pandemic and shrunk further 3.8% in 2020, with about 60% of the population now living in poverty, according to the World Bank. According to UNICEF, more than 1.5 million children are currently in urgent need of humanitarian assistance in Haiti. “The new wave of violent incidents that may arise after the killing of the President of Haiti could further exacerbate the humanitarian needs and hinder humanitarian access to the most vulnerable groups, leaving thousands of affected people with little to no assistance,” UNICEF warned.