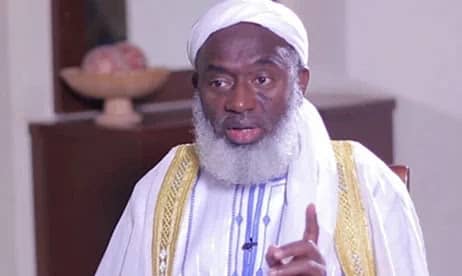 ■ ‘It’s unfortunate you have sympathy for criminals’ – Porgu ■ Group to bandits: ‘Steer clear of Yorubaland or face our wrath’

The Middle Belt Forum and a group in the South West, South-West Security Stakeholders Group (SSSG) have carpeted Islamic cleric, Sheikh Abubakar Gumi over what they called his sympathy for bandits.

The South-West group also warned bandits and other criminal elements to steer clear of the region, or face the wrath of the group.

In a statement jointly signed by the Convener of the group and the Aareonakakanfo of Yorubaland, Iba Gani Adams and the secretary, Alhaji Owolabi Amusat, the group said there are strong indications that bandits have perfected plans to strike in the South-West.

“In recent times, bandits have variously attacked the North East, North West and North Central, leaving disturbing scenes of terror, killings and destruction that are capable of destroying the sanctity of Nigeria,” it observed.

“On this note, the South-West Security Stakeholders Group considered it necessary to beef up the security operations in our region, and we charge the police and other security architectures across the region to remain vigilant in ensuring that the region is safe. Any attempt to invade the region will be resisted by our group.”

The group dismissed Sheikh Gumi’s visit to Igboho town, adding that it was an attempt to mock and undermine the efforts of the Yoruba activist and freedom fighter.“Sheikh Gumi is a Nigerian, he has a right to visit any part of the country,” it noted. “But it shouldn’t be to the extent of being deliberately attacking Igboho’s ideology in his hometown. Such attempt is provocative, and can lead to crisis. That was why it elicited various reactions. Gumi’s ideas are always at variance with the present realities in the country and it is better for him to desist from fanning the embers of discord in the country and the South-West in particular.

“SSSG is driven by the calls to ensure effective security across the South-West. We are also keen on regionalism where each region will control the security architecture of their respective space. If Nigeria didn’t return to regionalism based on the true Federalism that we have in the past, there may be crisis and nobody should blame those agitating for self-determination.”

In a related development, the National President of Middle Belt Forum (MBF), Dr. Bitrus Pogu, has criticised Gumi for his call for amnesty for the bandits and, for his attempt to compare them with Niger Delta militants.

It will be recalled that the Islamic cleric had urged the Federal Government to grant the bandits amnesty like it did to the militants that operated in the oil rich Niger Delta region. He also said that use of military force alone cannot subdue them, and warned of the danger of Nigeria turning becoming another Afghanistan.

But in an interview with Saturday Sun, Dr. Pogu condemned Gumi for his views while stating his reason that no mercy should be shown to them by Nigerian Armed Forces. “When these bandits were killing innocent Nigerians, did they show mercy? The answer is no,” he said. “The olive branch was shown to them severally, with negotiations. Some of the governors in the North-West tried to discuss with them and nothing happened. They felt they were stronger than government. So, what the government is doing now is to tell the bandits that they were not stronger in anywhere.

“The time for that amnesty that Sheikh Gumi was asking for has passed and elapsed. Let the military do the needful, so that they would be rooted out. Anybody who doesn’t want to fight should surrender and face the natural justice of the law of Nigeria. If people start killing others, then anybody can start killing and plead for amnesty later; this will encourage others to go and be killing people. If they are decimated, others will learn a lesson and will not pick up arms against the people or against the state.

“I’m not going to subscribe to what Gumi is saying. I don’t agree with him. It is unfortunate that he has sympathy for them. I don’t have any sympathy for a terrorist. They come and murder and terrorise innocent citizens. They come with guns and kill the people. So, I’m not in support of amnesty for them.”