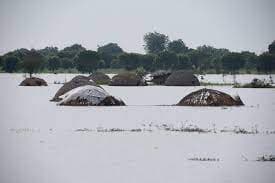 The Nigeria Hydrological Services Agency (NIHSA), an agency of the Federal Ministry of Water Resources, has predicted more devastating floods from the end of August to early October.NIHSA said floods will get worse in some states and the Federal Capital Territory (FCT) within that period.

The Director-General of the Agency, Engr. Nze Clement Onyeaso, in an interaction with some journalists in Abuja Wednesday, said all areas earlier identified as flood prone this year as well as those along the Rivers Niger and Benue might likely begin to experience more devastating flooding from the end of August.

“Nigeria is located within the River Niger Basin which is occupied by nine countries namely Benin, Burkina- Faso, Cameroon, Chad, Cote d’Ivoire, Guinea, Mali, Niger and Nigeria. Nigeria is located at the lowest position of the Basin and this means that once the upper catchment of the Basin gets flooded, Nigeria should be prepared to experience flooding. The period of flooding in these upstream countries is August and September of every year,’’ he said.

The DG said his Agency was monitoring the development, adding that it will also continue to monitor Cameroonian authorities with regards to flood scenarios in the upper catchment of the sub-basin.

Engr. Nze warned Lagosians against the practice of dredging and sound filling the Atlantic Ocean, to build what they usually call model cities like those in Lekki and Banana Island, saying such may, in the future, pose serious threats.

As part of the preparation for the expected floods, the DG called on Nigerians, especially the state governments to be fully prepared by ensuring cleaning of blocked drainage systems and canals to remove refuse, weeds, water hyacinths and floats on water channels.

Daily Trust reports that the Agency had earlier predicted that 121 LGAs in 27 states and FCT might experience severe flooding this year.