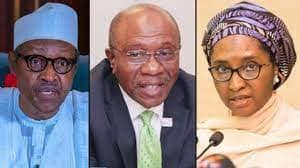 The Federal Government made a total of N3.25tn in 2020, according to a review of the budget performance of the 2020 Appropriation Act.

The review also showed that the Federal Government spent a total of N2.34tn on debt servicing within the year.

This means that between 2019 and 2020, the Federal Government’s debt servicing to revenue ratio jumped from 54.66 per cent to 72 per cent.

The N12.47tn foreign debt was not broken into federal and subnational segments. However, historically, about 86 per cent of Nigeria’s foreign debt usually belong to the Federal Government.

Although the Federal Government consistently argues that its debt to Gross Domestic Product is low, economists and experts say that it is better to use the debt servicing to revenue ratio to measure a country’s indebtedness.

This is because the debt servicing to revenue ratio measures a country’s capacity to repay its loans.

Although the Federal Government had projected a revenue of N5.84tn for 2020, actual revenue was N3.25tn.  It also projected to spend N2.68tn on debt servicing.

In 2020, the Federal Government spent N3.17tn on personnel and overhead costs, two segments of the nation’s recurrent expenditure.

The government spent N1.57tn on capital expenditure. Total expenditure for the year was N9.75tn, with the nation borrowing a total of N2.06tn as domestic borrowing in the year.

The Federal Government spent N2.37tn on overhead and personnel cost within the year and N1.17tn on capital expenditure. Total debt servicing gulped N2.11tn of government revenue. Total expenditure for the year was N8.29tn, and total borrowing was N912.82bn.

According to the budget office, in 2020, the Federal Government continued to meet its non-discretionary expenditures even as budget implementation continued to be affected by poor revenue outcomes.

However, it said, it was important to accelerate efforts towards improving the growth record and revenue performance.

The office added that enhancing revenue collection in 2021 was key to the successful implementation of the 2021 budget.

In its fourth quarter 2020 budget implementation document, the office said, “Efforts to moderate the growth in recurrent expenditure and particularly personnel and recurrent debt in 2021 is critical even as effective implementation of the COVID-19 containment measure continues to be paramount.

“The Federal Government has reiterated its commitment to improved openness, transparency and accountability in budget preparation, implementation, monitoring and evaluation and feedback.

“Efforts would also be geared towards fostering efficiency in budget implementation, while ensuring effective project management in 2021.”

He said, “We are permanently fire-fighting. We have no long-term vision for our country. So, politicians tend to act ‘for this moment, for this tenure’.  They don’t often think about what will happen in five years or ten years; that is why we have these kinds of borrowing.

“As far as most politicians are concerned, the problem will come when they are gone. So, it becomes a problem for those who have to deal with it. What has been done in the past is using fiscal responsibility

“There are states in the US that have balanced budget law that says you can’t spend beyond what you earn. Obviously, that can limit the flexibility of growing the economy and all of that but there should be certain guidelines.”

Utomi said that the nation had built a big government, which is a huge cost for a poor country. And since the government has to maintain expenditures in light of falling revenue, the government would continue to borrow more, he added.

He raised the alarm regarding the consequences of failing on loan repayment.

Utomi said, “The consequence is huge. For instance, we are seeing some countries being taken over by China due to inability to pay debt.

“We may wake up one day and find out that one of our infrastructures like Apapa ports belongs to a foreign government due to our borrowing.

“There must be a dramatic trimming of costs in the country and a dramatic push for production. Right now, we are driven by revenue from crude oil. The outcome will be disastrous if nothing is done.

“If we don’t have any money to pay salary, for maybe five years, because the entire money is used to service debt, there may be one to two years without salary for civil servants. It is not new, it had happened. If that becomes a norm nationwide, there will be more violence, crime, hunger, and instability.

“In the short run, we need an open debt conversation and strategies.  In the long run, we need to restructure our system.”

He said for a country of 200 million people, money was needed to be invested in the populace.

Teriba said if the main share of government’s revenue goes to servicing debt, then the nation was falling into a debt trap.

He said, “Now what is the solution? What can Nigeria do to change the situation? First you have to understand the problem; you can’t completely blame the government for the revenue shortfall; particularly for last year.

“This is because there was a global pandemic, whose ripple effect depressed not just global economic prices but domestic economic activities, which pushed the domestic economy into a recession.

“Therefore, the government should manage the pandemic effectively; it will go and the revenue will grow back after the pandemic passes.”

Teriba believes that the quality of government debt is poor.

He said, “The Nigerian government borrows in the worst possible way and in a very outdated manner. This causes a backlash to the government. Because Nigeria’s debts are not linked to any assets, we just go to the treasury bill market and borrow, at any rate that anybody wants to give you.

“There are many other countries who borrow more than what Nigeria is borrowing and don’t have any problem paying back. They borrow intelligently and efficiently, in a way that their debts service themselves.

“A more efficient way of borrowing is for the Federal Government to migrate all the debts to asset-linked debts. This means structuring the borrowing transaction like investments. There must be an underlying asset to which borrowers can use to recover the principal they gave the country plus profit.”

Teriba added that the nation should focus on equity, and if equity investments were focused on, it would reduce debt servicing burden on the nation, as there was no pay back or service clause on enquiry.

He added, “Finally, it is not just debt and equity you can get from assets; you can get revenue from assets, by leasing or selling these national assets, just like what the British government has been doing.

“So, what the Federal Government should diversify is not the economy or exports; it is its debt or financial portfolio.”

A professor of economics at the Olabisi Onabanjo University Ago-Iwoye, Ogun, Sheriffdeen Tella, said, “The first thing the government has to do is to stop borrowing, and start looking for ways of generating wealth, instead of thinking they can only generate money from borrowing.

“They should also think about how to improve tax collection because it would also assist. They also need to approach creditors for debt suspension for some time so that revenue generated can be used for more development instead of debt servicing.

“If this renegotiation is done, the government can improve the economy, which will lead to job creation, more employment and taxes.”

He added, “The government can also raise funds from domestic sources to offset some debts or for infrastructure that would generate funds to pay debt.

“Nigerians should be worried about the cost of debt servicing because it is already affecting us. We get money from oil but we are using it to service debt so there is no development or economic advancement.”

The country was in a serious problem, which is affecting everybody, Tella added.