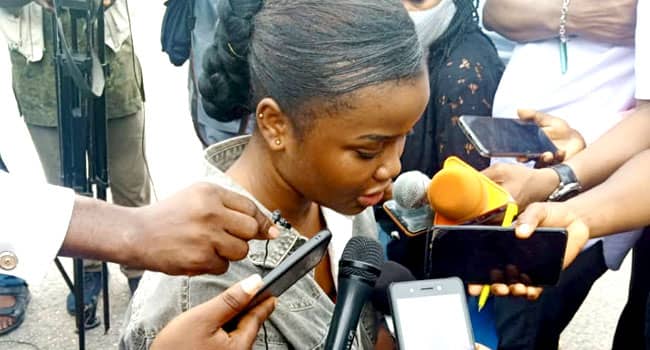 Chidinma Ojukwu, a 300 level Mass Communication Department student of the University of Lagos accused of killing the Chief Executive Officer of Super TV, Usifo Ataga, has been remanded in the custody of the Nigerian Correctional Services.

A Lagos State Chief Magistrates’ Court sitting in the Yaba area gave the order on Monday when she and one Adedapo Quadri were brought before the court by the Lagos State Police Command over alleged conspiracy and murder of the victim.

When the case was called, they, however, could not take their plea because the magistrate court was not constitutionally empowered to try the offence.

After listening to the police, the Magistrate, Adeola Adedayo, ordered that the defendants be kept in prison for the next 30 days to allow for investigations to be completed, and pending the release of legal advice on the matter by the state’s Director of Public Prosecution (DPP).

While moving the remand application, police prosecutor, Cyril Ajiofor, stated that the application was based on Section 264 Subsections 1 and 2 of the Criminal Law of Lagos State.

Ajiofor informed the court that a 12-page affidavit – statements of the defendants and exhibit to show that the file has been duplicated to the DPP for legal advice – had been attached to the remand application.

“We are praying for the remand of the defendants for the first count of murder,” he stated.

Representing the first defendant, Babajide Martins, who is the Director of the Office of Public Defender, said the remand application was “inevitable”.

Martins who was not opposed to the application urged the prosecution team to make necessary documents available to the defence before being brought before the court.

Ataga was found dead with multiple stabs on June 16 at a short-let apartment on Adebowale Oshin Street, Lekki Phase I where he had checked in with his lover, Chidinma.

Chidinma was consequently arrested on June 23 in her father’s house in Yaba and paraded at the Lagos State Police Command headquarters in Ikeja.

The 50-year-old deceased was buried on July 30 in a low-key ceremony attended by his family members, including his wife, and friends.