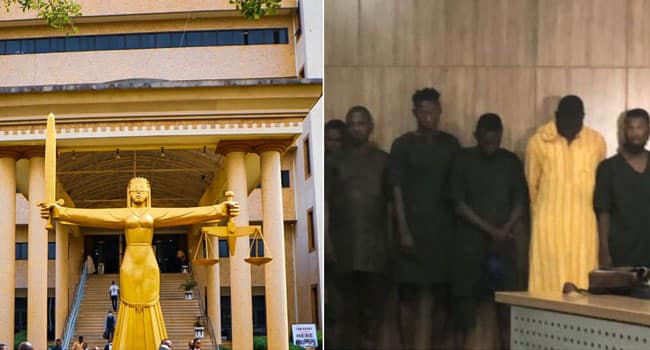 Justice Obiora Egwuatu of the Federal High Court in Abuja has ordered the Department of State Service (DSS) to produce the 12 aides of Sunday Adeyemo, also known as Sunday Igboho, who have been in their custody since the second of July, 2021.

The aides to Igboho who were arrested at his residence are expected to be in court on Thursday, 29th July and their case is expected to proceed regardless of the annual court vacation slated to begin on the 26th of July

The suspects had earlier sued the DSS before the Federal High Court Abuja, on grounds that their fundamental human rights had been infringed.

Some of the men suspected to be Igboho’s guards paraded by the DSS in Abuja on July 1, 2021.

They also claimed that their arrest and subsequent detention were unlawful.

Earlier, Igbohos aides had sought an order of the court, through their counsel, Pelumi Olajenbasi, compelling the DSS to produce them before the court and to show why they shouldn’t be granted bail in accordance with the provision of section 32 of the criminal justice act 2015.

Their counsel told the court that his clients have remained underground for the past 20 days, and were denied freedom.

He added that they were Nigerian citizens and have inherent rights, just like others, and the world is watching how the judiciary, would vitalize the consciousness of Nigerians.