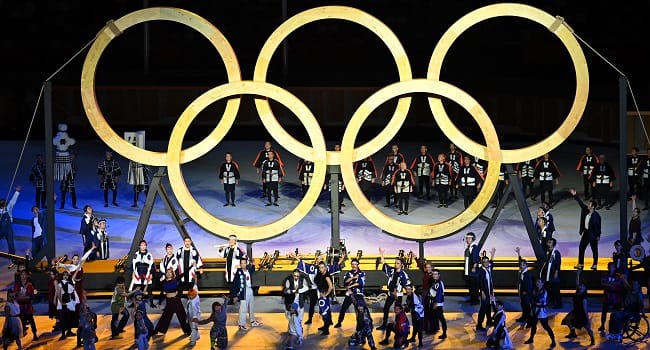 ⌊ Performers assemble the Olympic Rings during the opening ceremony of the Tokyo 2020 Olympic Games, at the Olympic Stadium in Tokyo, on July 23, 2021. (Photo by Dylan MARTINEZ / POOL / AFP)

Four competitors including a shooting world number one saw their Tokyo Olympic dreams dashed on Wednesday after testing positive for the coronavirus.

British shooter Amber Hill, top-ranked in the women’s skeet, was forced to pull out before she departed for Japan after testing positive.

“After five years of training and preparation, I’m absolutely devastated,” she said in a team statement.

Table tennis player Pavel Sirucek became the third member of the Czech delegation to test positive for Covid-19 in the Athletes’ Village, the team said.

The Tokyo Olympics are being staged in biosecure “bubble” conditions, with athletes tested daily and under orders to stay socially distanced and wear masks when not competing, training, eating or sleeping.

But the latest cases show that competitors are treading a fine line.

Chilean taekwondo competitor Fernanda Aguirre was “devastated and very sad”, she said on social media, after testing positive on arrival in Japan from a training camp in Uzbekistan.

“(She) is asymptomatic and in good health, but unfortunately will not be able to compete because the Japanese authorities impose a 10-day quarantine,” a Chilean Olympic committee statement said.

The 21-year-old, who won a bronze medal at the 2019 Pan American Games, has been moved to an isolation facility, as has her coach.

Meanwhile, Dutch skateboarder Candy Jacobs described herself as “heartbroken” after she too was forced out.

Jacobs said on Instagram she had “done everything in my power to prevent this scenario and took all the precautions”.

“Unfortunately I was tested positive for Covid-19 this morning, which means my Olympic journey ends here,” the 31-year-old said.

A Czech staff member also failed a test upon landing in Tokyo.

“We are terribly sorry about the situation,” said Czech team head Martin Doktor.

Sirucek’s positive test was announced only minutes before the draw of the table tennis tournament, meaning he is denied a first appearance at an Olympics.

“I was afraid there would be sports tragedies. But no one can really influence the spread of the virus, despite all the measures,” Doktor said.