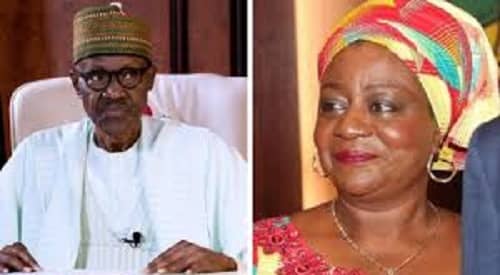 Despite the Senate’s rejection of the nomination of Lauretta Onochie as Commissioner of the Independent National Electoral Commission, the Presidency on Tuesday reaffirmed its confidence in her.

A Presidency source told The PUNCH, “The fact that President Muhammadu Buhari — who made the nomination — had not chosen to withdraw it shows that he still has faith in the process and Onochie’s candidature is viable. So far, he hasn’t withdrawn his confidence in Onochie.”

Onochie’s nomination attracted public outcry because of her open partisanship and the fact that her appointment would have amounted to a breach of the federal character principle.

The Chairman of the Committee on the Independent National Electoral Commission, Senator Kabiru Gaya (APC, Kano South), had disclosed that the petitions against the Presidential aide were against the backdrop of her involvement in politics and alleged membership of a political party.

Gaya said, “In the case of Ms. Lauretta Onochie, we studied her curriculum vitae and other relevant documents, followed by exhaustive interaction around the petitions against her nomination which she responded to accordingly, including attesting that she is not a registered member of any political party.”

Attempts to get a response from the Special Assistant to the President of Media and Publicity, Mallam Garba Shehu were futile.

Calls to his mobile phone indicated that he was unreachable. He had yet to respond to a text message sent to him as of the time of filing this report.

Senators Have Distinguished Themselves, Says Jega

While reacting to Onochie’s rejection by the Senate, a former INEC chairman, Prof. Attahiru Jega, commended the Senate for rejecting her nomination.

An elated Jega told The PUNCH late on Tuesday, said that by their action, the Senators have “Distinguished themselves.”

He said “The Senators had on this matter ‘distinguished’ themselves. We hope that they would do better on the Electoral Bill 2021.

Speaking in a similar vein, the Peoples Democratic Party, welcomed the decision of the Senate to listen to the voice of reason.

“The fact remains that the All Progressives Congress is desperate to hang on to power by all means. Allowing people like Onochie to get into INEC would have compromised any election even before the first ballot is cast.”

In response, a former Deputy National Publicity Secretary of the APC, Yekini Nabena, dismissed the PDP’s claim. He told one of our correspondents in a telephone interview that the opposition party was sulking that it was losing members “by the minute.”

Nabena said, “The argument that her political affiliation is enough reason to reject her is not even an argument. As we speak, the Resident Electoral Commissioner for Edo State, Johnson Alalibo, was a member of the Bayelsa State House of Assembly, he is a card-carrying member of the PDP appointed by former President Goodluck Jonathan; so what is the PDP talking about.”

‘Why We Rejected Onochie’

Gaya also explained that the presidential aide was not rejected based on political affiliation.

Gaya said this while addressing journalists after Tuesday’s plenary.

He said, “We couldn’t approve the appointment of Onochie because she is from the same state as an INEC commissioner from Delta State, Mrs Agbamuche-Mbu, whose tenure may expire by December this year.

“Agbamuche-Mbu is still serving in INEC till December this year. That’s why we cannot clear another candidate from the state.”

Gaya said the committee considered various legal implications of the confirmation or otherwise of the nominees and also studied the mood of Nigerians before coming up with its report.

The Senator said his panel did not rely on the submissions of Onochie when she told the committee that Agbamuche-Mbu was actually representing Cross River State on the board of INEC.

“President Buhari actually specified her (Agbamuche-Mbu) state, which is Delta, in the letter.

“Also, during her confirmation by the 8th Senate, I was there when two senators from Delta, Messrs Ovie Omo-Agege and James Manager, stood up to congratulate the Senate for confirming her.

“We also got records from the past senate screening that Agbamuche-Mbu was a nominee from Delta State.”

On her membership of the APC, Gaya said the committee could not disqualify Onochie based on the records before it.

He said, “Madam Onochie has said she has ceased to be a member of the APC.

“The law said we can only disqualify a card-carrying member of a political party and since she denied her APC membership, we cannot hold that against her.”

Gaya had said in his report at plenary said the Committee received several petitions against the nominations of Onochie and Adam.

The Senate had earlier confirmed the appointment of five nominees as National Commissioners of INEC.

The upper chamber also stepped down the confirmation of Prof. Sani Adam (North Central) for further investigation by the committee.

The confirmation of the nominees followed the consideration of a report by the Gaya-led Senate Committee on INEC.

However, a PDP Senator from Benue State, Abba Moro, insisted that the nominee would still have been rejected even if not for the federal character principle.

Moro stated this in a telephone interview with one of our correspondents on Tuesday.

He said the Senate Committee on INEC, gave her a soft landing.

Moro said, “The truth of the matter is that the majority of Nigerians objected to the nomination of Lauretta Onochie, right from when she was presented to the Senate.