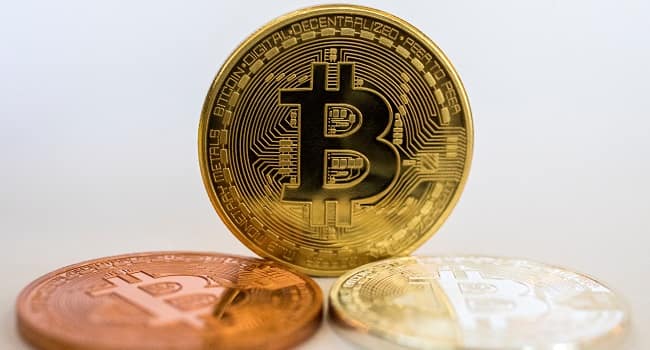 ⌊ In this file photo taken on February 06, 2018 A picture taken on February 6, 2018 shows a visual representation of the digital crypto-currency Bitcoin, at the “Bitcoin Change” shop in the Israeli city of Tel Aviv.  (Photo by JACK GUEZ / AFP)

Tesla, Twitter and maybe Amazon: Big tech companies are interested in bitcoin and it could take off again after several weeks of laying low.

Bitcoin soared close to $40,000 on Monday after electric carmaker Tesla expressed fresh support for the world’s most popular cryptocurrency.

It leapt 15 percent in Asian trade to a one-month high at $39,681, buoyed also by reports that US retail titan Amazon was mulling the use of crypto technology.

Bitcoin later eased back to $38,880 in European deals.

Analysts said the sudden jump was the result of several developments.

The US investment group Ark Invest organised last week what it called “The B Word”, an event aimed at promoting the virtual currency.

The group had Tesla founder Elon Musk and Jack Dorsey of Twitter reaffirm their interest in bitcoin.

Musk has been ambivalent about the digital currency, sometimes singing its praises, while also expressing concern about its environmental impact.

In this file photo, Tesla CEO Elon Musk talks to the media as he arrives to visit the construction site of the future US electric car giant Tesla in Gruenheide near Berlin on September 3, 2020. Odd ANDERSEN / AFP

This time he said Tesla would likely start accepting bitcoin as payment, which helped rekindle a flame under it.

Bitcoin had shot up by 290 percent over a one-year period to an all-time high of almost $65,000 in April, before falling back by about 40 percent.

“The bulls are back in town, and this time it seems like they are back with a vengeance,” said Naeem Aslam, an analyst at AvaTrade.

The second development that caused a social media buzz was a posting by Amazon for a job related to digital currencies and blockchain strategy.

“Bitcoin is flying once again and it would appear the credit is going to Amazon, or more specifically a job posting at the company,” remarked Craig Erlam, an analyst at the online brokerage Oanda.

“What that actually means is anyone’s guess but what it does do is excite crypto enthusiasts and gets the rumour mill pumping,” he added.

Erlam suggested that traders who needed to buy bitcoin to fulfil contracts coming due might also have played a role.

“It seems some significant short covering is taking place as bearish traders have seen the writing on the wall and rushed to the exits, after seeing what bitcoin can do when the bulls take control,” said the analyst.