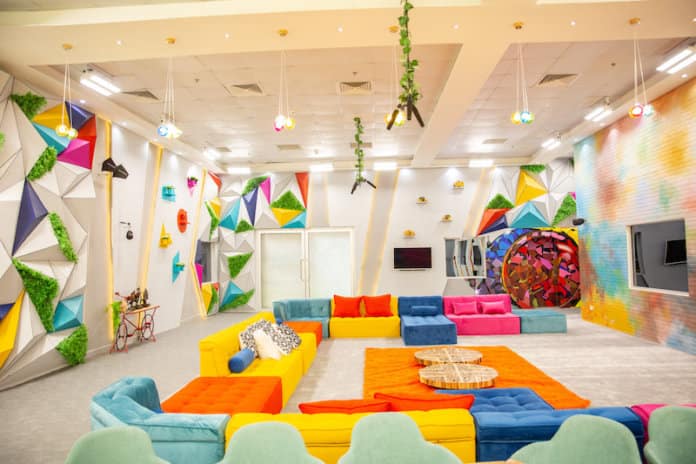 Despite a technical glitch that delayed the launch show of the sixth season of the Big Brother Naija show, the popular reality TV show still kicked off on a colourful note.

The Big Brother House which is a main feature of the show dominated conversations on social media for its spectacular decor. Since the return of the BBNaija house to Nigeria in 2019, the multi-purpose facility has gone through several modifications and this season happens to be the biggest yet with a brand new mezzanine floor added to the structure, measuring over 200sqm. This is in addition to the original house, which measures about 1800sqm with an additional 250sqm for support building services such as the presenter and artistes’ lounges and an art room where all the props for the arena games are made.

For this season, the organisers MultiChoice Nigeria played with colours. From the red and blue bedrooms to the lounge draped with colourful sofas, walls adorned with geometric shapes with an accent of African décor pieces and the new ‘eye-catching’ door. The Head of House room which is on the mezzanine floor spotted a new look. Measuring over 50sqm, The Victorian-themed room features a gold headboard above the king-sized bed complete with embroidered maroon throw pillows and a vanity table against a wall with gold detailing. The Diary room where Big Brother gets all the juicy details from housemates comes in a dark hue with the chair being the only sparkling element in the room while the HoH chair has a gold lion statue at the foot The kitchen, another popular spot in the house also shares in the opulence with greenery and colourful cabinets.

New additions to the house include the private Executive Lounge which looks like a rainforest with the green tufted upholstery and matching green walls. For the first time, the house features an indoor games lounge with a trophy cabinet. The outdoor area also features a redesigned patio with a mural painting and jacuzzi. All pieces in the house were locally sourced with close to 75 artisans working to bring this season’s theme to life.

“A lot goes into the production of BBNaija. We ensure that each season we deliver a great show and this includes the look and feel of the house, which is an integral part of the show,” said Chief Executive Officer of MultiChoice Nigeria, John Ugbe.

The sixth season themed ‘Shine Ya Eye’ is the second time the show is holding in a pandemic era. Thus, like last year, no visitors will be allowed in the house, in adherence to Covid-19 guidelines.