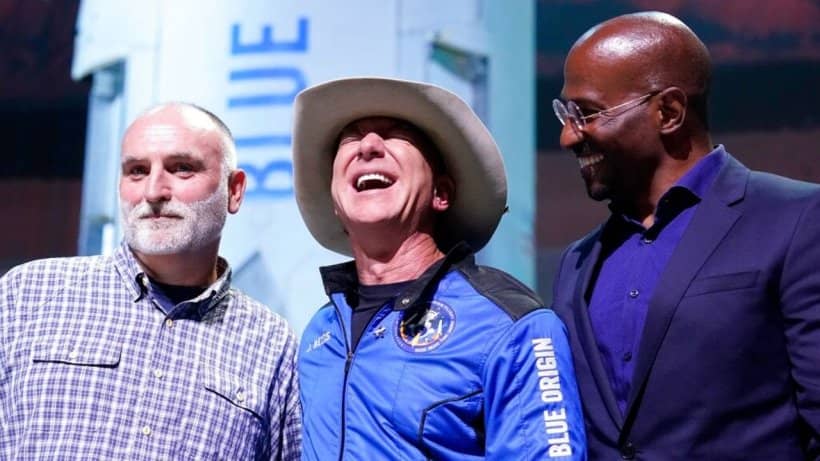 Jeff Bezos, the Amazon (AMZN) founder and world’s wealthiest man, said Tuesday after flying to the edge of space that he planned to award $100 million each to CNN contributor Van Jones and chef José Andrés.

Bezos said that Jones and Andres were free to do “what they want” with the money.
“They can give it all to their own charity,” Bezos said at a press conference after his trip to space. “Or they can share the wealth. It is up to them.”
The money, Bezos said, was tied to a “surprise” philanthropic initiative he wanted to announce called the Courage and Civility Award.
The award aims to honor those who have “demonstrated courage” and tried to be a unifier in a divisive world, Bezos added.
“We need unifiers and not vilifiers,” Bezos said. “We need people who argue hard and act hard for what they believe. But they do that always with civility and never ad hominem attacks. Unfortunately, we live in a world where this is too often not the case. But we do have role models.”
Jones, accepting the award, said that “sometimes dreams come true.”
“You bet on me and I appreciate it,” Jones told Bezos, later adding that it was money for him to “give to others who have a similar spirit.”
Andrés, who has poured his efforts into feeding those in need around the world, said that the award itself “cannot feed the world on its own.”
“But,” Andrés added, “this is a start of a new chapter for us.”
Anderson Cooper, who was anchoring CNN’s special coverage on Tuesday, said on-air after Bezos announced the award that it was “quite a surprise.”
“None of us knew anything about it,” Cooper said.
The philanthropic initiative from Bezos comes as he and fellow billionaires such as Richard Branson, the Virgin Galactic investor, face criticism for spending their wealth on space tourism. Bezos has previously been criticized for not contributing more to philanthropy, but has donated billions of dollars in recent years to causes including climate change and food banks.

Critics have said that the world’s richest people should work to improve the conditions for people here on Earth, instead of flying off into space. Bezos and supporters of the space programs, however, have countered that both are possible.
“Well, I say they’re largely right. We have to do both,” he said in an interview with CNN Monday. “You know, we have lots of problems here and now on Earth and we need to work on those, and we always need to look to the future. We’ve always done that as a species, as a civilization. We have to do both.”
(Text, excluding headline CNN)