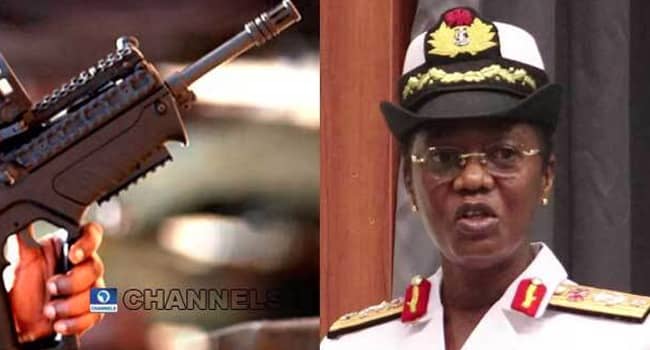 The Nigerian Navy has dissociated itself from the submissions made by commodore Jemila Malafa at a House Public Hearing on a bill to establish a commission against the proliferation of small arms and light weapons.

Commodore Malafa who represented the Navy at the hearing earlier on Tuesday alleged that Chadian soldiers engaged in the illicit trade of small arms.

According to her, Chadian soldiers sell guns for as low as $20 (N8,200) and this further endangers Nigeria’s security.

“Some of these countries that we have a border with have no armoury. They do not have armoury. So most of their arms that are being donated by — I don’t want to be specific — the developed countries in the name of assisting us to fight our problems — are compounding our problems in Nigeria because you find out that each average Chadian soldier has 20 to 30 arms underneath his bed,” she said.

“Since we are going to collaborate with ECOWAS and other countries that are donating such arms to these countries [African countries], I think we should insist that they should either enact laws to govern the handling of these arms and ammunition or build an armoury for these countries or else we will not see peace.”

But according to a statement signed by the Spokesman of the Navy, Commodore Dahun Suleiman, the Nigeria Navy disowned her claims, saying they do not represent the position of the Navy.

“During the hearing on this Bill, the representative of the Nigerian Navy (NN) duly presented the position of the Service on the proposed Act but went ahead to make some unauthorized, personal comments on the issue of transnational trafficking of small arms and light weapons,” the statement read in part.

“The Nigerian Navy appreciates the indelible contributions of our regional partners and neighbours in the fight against small arms and light weapons trafficking”.

The navy further stated that Nigeria maintains robust diplomatic security relationships with its neighbouring countries and commits to deepening the existing arraignments.