Twelve Years of Terror: A Timeline Of The Boko Haram Insurgency 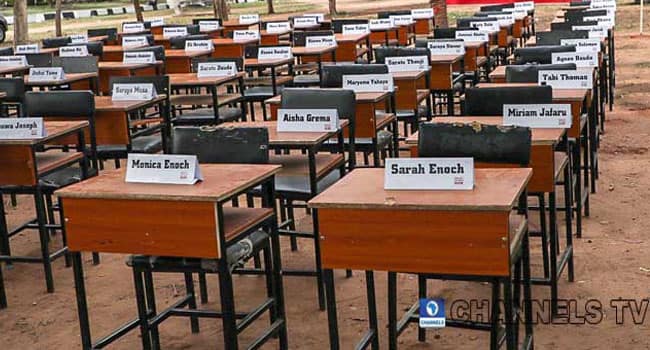 ⌊ In this photo taken on April 14, 2021, the names of some of the Chibok girls still in captivity are displayed on desks in commemoration of the seven years anniversary since they were abducted by Boko Haram in Borno State.

It started as a largely peaceful religious movement in northern Nigeria. But the violent rhetoric was never inconspicuous. Yet, the government didn’t pay much attention to Boko Haram. Until 2009, when the group’s leader, Mohammed Yusuf, was murdered while in police custody, setting off an inexorable chain of violent events that has threatened the very existence of the Nigerian state. Twelve years later, thousands have died and hundreds of thousands more have been displaced or remain in captivity. Yet, the insurgency is far from over. Here is a timeline of events of Nigeria’s never-ending conflict:

2002: Mohammed Yusuf founds Boko Haram, a group with the aim to ‘purify’ Islam in Northern Nigeria.

July 2009: Yusuf is killed in a Boko Haram uprising while in police custody.

7 September 2010: Boko Haram members launch an attack on a federal prison in Bauchi, freeing up to 721 prisoners, including up to 150 affiliated with the group.

16 June 2011: A suicide bomber drives a car bomb into the Nigeria Police Force headquarters in Abuja and kills up to six people.

26 August 2011: A car bomb explodes at a United Nations building in Abuja, killing at least 21 and wounding 60.

25 December 2011: A series of bomb attacks on Christmas Day kills about 40 people and injures many others.

31 December 2011: President Goodluck Jonathan declares a state of emergency in parts of the North-East and orders the borders with Cameroon, Chad and Niger shut.

8 January 2012: President Jonathan says Boko Haram members have infiltrated his government, including the military and police.

14 May 2013: President Jonathan extends the state of emergency to cover Borno, Adamawa and Yobe states.

14-15 April 2014: About 276 female students are kidnapped from Government Girls Secondary School at the town of Chibok in Borno State.

January 2015: Boko Haram seizes a Nigerian military base in Baga, a key town in Borno state.

February 2015: Nigeria postpones presidential elections for six weeks as a coalition of military forces including those from Chad, Cameroon and Nigeria begin a campaign against Boko Haram.

March 2015: Forces from neighbouring Niger and Chad launch a ground and air offensive against Boko Haram in Borno.

9 September 2015: The Nigerian military says it has destroyed all known Boko Haram terrorists’ camps and cells in the North-East.

17 November 2015: The Global Terrorism Index reported that Boko Haram – after killing 6,644 people in 2014 – had overtaken Isis as the world’s deadliest terror group.

December 2015: President Muhammadu Buhari says Nigeria has “technically won the war” against Boko Haram because the group can no longer mount “conventional attacks.”

22 June 2016: Reports from US intelligence emerge of a split between Abubakar Shekau and ISIS over the use of children as suicide bombers.

August 2016: ISIS attempts to oust Shekau from his leadership role and replace him with Abu Musab al-Barnawi, apparently for his refusal to cease targeting muslim civilians.

17 January 2017: The Nigerian Air Force bombs an IDP camp in Rann, Borno after mistaking it for a Boko Haram camp, killing scores of civilians.

9 February 2020: About 30 travellers are burnt to death while sleeping in their vehicles during an overnight stop on the A3 road in Borno.

23 March 2020: At least 50 Nigerians soldiers are killed in an ambush by Boko Haram near Goneri village in Borno.

11 December 2020: Over 330 students from the Government Science Secondary School in Kankara, Katsina state, are abducted.

22 July 2021: Nigeria receives the first batch of A-29 Super Tucano aircrafts procured from the United States of America to prosecute the insurgency and other criminal elements.