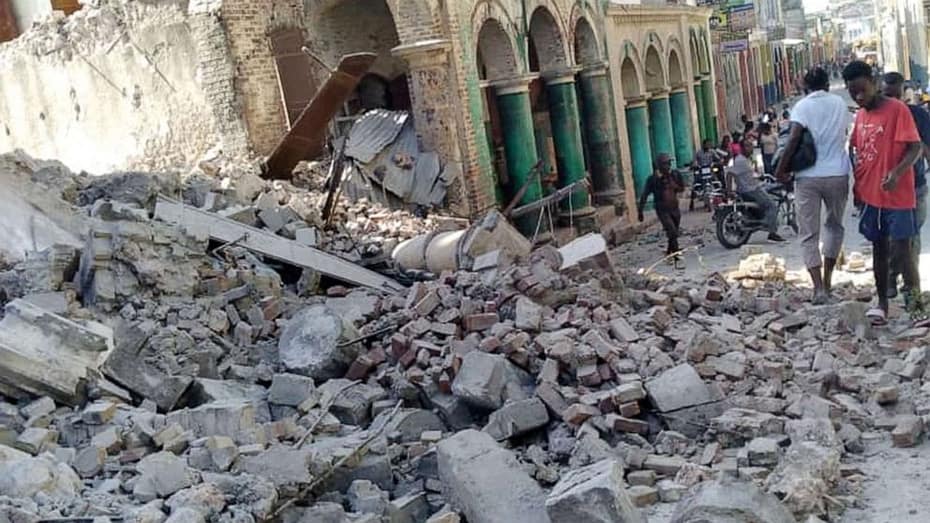 The Haitian government declared a state of emergency after at least 304 people died in a 7.2 magnitude earthquake that hit the country Saturday morning, Prime Minister Ariel Henry announced in a news conference.

More than 1,800 people were injured, the country’s civil protection service said.
“When it comes to medical needs, this is our biggest urgency. We have started to send medications and medical personnel to the facilities that are affected,” Henry said. “For the people who need urgent special care, we have evacuated a certain number of them, and we will evacuate some more today and tomorrow.”

The state of emergency will be in the Western Department, Southern Department, Nippes, and Grand’Anse.
One hospital in the southern city of Jeremie said it is overwhelmed with patients.

Related article: Haiti Fast Facts
“There are a lot of people coming in — a lot of people,” an administrator at the Hopital Saint Antoine told CNN. “We don’t have enough supplies.”
The hospital has set up tents in its courtyard, the administrator said.
The earthquake was about 12 kilometers (7.5 miles) northeast of Saint-Louis-du-Sud and 10 kilometers deep, according to the US Geological Survey (USGS).
“There are reports of significant damage to homes, roads, and infrastructure,” American Red Cross spokeswoman Katie Wilkes said.

Buildings and cars were damaged in Les Cayes, Haiti.

Martine Moise, the first lady of Haiti, said her heart “hurts” after receiving news about the earthquake, which caused enormous damage south of Grand’Anse.
“The initial information that I have received from Grand’Anse is heart-wrenching,” the first lady said. “It hurts my heart for the kids, the mothers, the elderlies, the handicaps, my friends, and all the victims of this earthquake.”
“My brothers and sisters, we have to put our shoulders together to come together to demonstrate our solidarity. It is our togetherness that makes up our strength and resilience. Courage, I will always be by your side.” Moise added.

Videos posted on social media offer a glimpse of the widespread destruction. One from Les Cayes shows a street strewn with rubble and what is left of a number of buildings. Dust fills the air.
A man in the video said that he was lucky that the building he was in did not collapse, but many other houses in the area did.
“There are a lot of wounded on the street,” he said.
A 7.0-magnitude earthquake that struck Haiti on January 12, 2010, left between 220,000 and 300,000 people dead and injured hundreds of thousands more. That was 13 kilometers deep.

A 5.2-magnitude aftershock hit later in the morning about 20 kilometers west-northwest of Cavaillon, Haiti, according to the USGS. That was followed by several more, including a 5.1-magnitude aftershock around noon.
A tsunami threat that had been issued for the region has passed, according to the US Tsunami Warning System.
Haiti is in the cone of Tropical Storm Grace, and can expect tropical storm-force winds and heavy rain that could lead to flash flooding Monday into Tuesday, CNN Meteorologist Haley Brink said.
Heavy rain could lead to localized flooding and mudslides across the region, according to Brink.
A tropical storm watch is likely to be issued for Haiti later Saturday after one was issued for the Dominican Republic, which shares the island of Hispaniola with Haiti.

Haiti Earthquake Fast Facts
“We’re concerned that this earthquake is just one more crisis on top of what the country is already facing — including the worsening political stalemate after the president’s assassination, COVID and food insecurity,” Jean-Wickens Merone, a spokesman with World Vision Haiti, said in a statement.
Haitian President Jovenel Moise was killed July 7.
Merone is in Port-au-Prince, about 100 miles from Saint-Louis-du-Sud, and said the shaking there lasted “more than five to ten seconds,” and both sides of his house were shaking.

Henry, the Haitian Prime Minister, declared a state of emergency earlier Saturday and in the evening, arrived at Grand’Anse to assess the extent of the damage.
“I am currently in the Grand’Anse department to see the extent of the damage in order to better coordinate government actions on the ground,” Henry said in a Saturday Twitter post.
“Resources have been mobilized since this morning to provide aid and assistance to the victims of this devastating earthquake,” he added.
Henry said earlierhe has mobilized the government to assess and help.

Fear stalks Haitians as their murdered president is buried and gangs terrorize the capital
“Following the earthquake that caused enormous damage in the South, Grand’Anse and Nippes, I have already mobilized the entire government team to adopt all necessary measures- as a matter of urgency,” the tweet read.
Henry urged Haitians to band together in solidarity.
“I offer my sympathies to the relatives of the victims of this violent earthquake which caused several losses of human lives and property in several geographical departments of the country,” Henry tweeted.
“I appeal to the spirit of solidarity and commitment of all Haitians, in order to form a common front to face this dramatic situation that we are currently experiencing,” another tweet read.

In a statement on Saturday, US President Joe Biden said he was “saddened by the devastating earthquake that occurred in Saint-Louis du Sud, Haiti, this morning.”
“We send our deepest condolences to all those who lost a loved one or saw their homes and businesses destroyed,” the statement said. “I have authorized an immediate US response and named USAID Administrator Samantha Power as the senior US official to coordinate this effort.”
Power said on Twitter Saturday night she authorized the deployment of a USAID Disaster Assistance Response Team to Haiti and is coordinating with the Haitian government to assist the country.
“Initial assessments indicate widespread damage and destruction. The US is mobilizing urgently to support the Haitian people,” Power wrote.

Earthquakes Fast Facts
The Red Cross’ emergency response system has been activated and the organization is “identifying urgent needs on the ground,” Wilkes said.
Doctors Without Borders/Médecins Sans Frontières (MSF) is preparing to receive patients at Tabarre Hospital in Port-au-Prince, MSF Commucation Advisor Tim Shenk said.
Since June, armed gang violence has cut off some areas affected by the quake, making the aftermath a logistical challenge, Jacqueline Charles, Caribbean Correspondent for the Miami Herald, told CNN.
“This is a country that doesn’t have access to helicopters, other than what the United Nations has. So logistically this is a huge challenge,” Charles told CNN’s Fredricka Whitfield.
Several Latin American countries said they were preparing to support Haiti.
Chilean President Sebastian Piñera said on Twitter Saturday they contacted Haitian authorities and are currently preparing to send humanitarian aid. Mexico President Andres Manuel Lopez Obrador also said on Twitter he has ordered the National Coordination of Civil Protection and other ministries like Foreign Affairs, Navy, and Defense to prepare help “immediately.”
The Foreign Ministry of Panama announced they were preparing to send humanitarian aid soon and in the Dominican Republic, President Luis Abinader said he gave instructions to the foreign minister to call the Haitian counterpart to “facilitate any help within our possibilities.”
Colombia’s President Ivan Duque said the Air Force will be deployed to Haiti on Sunday carrying a team specialized in search and rescue.
“It will be 18 tonnes of equipment to fulfill their mission: save lives,” he said in a Saturday tweet.
Other countries including Argentina, Peru, Ecuador and Venezuela also expressed their support for Haiti.
Correction: An earlier version of this story gave the incorrect depth of Saturday’s earthquake near Haiti. It was 10 kilometers deep, according to the USGS.
(CNN)