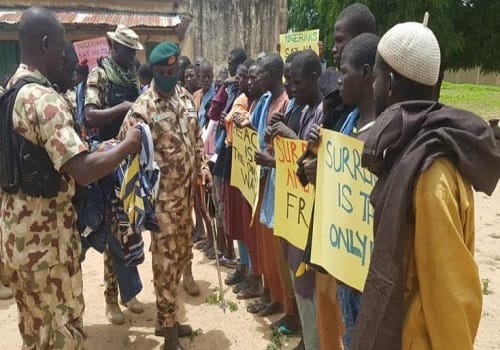 No fewer than 5,890 terrorists have surrendered to troops in the Northeast following intensive bombardment of their hideouts, the Defence Headquarters (DHQ) has disclosed.

Five hundred and sixty-five of the surrendered Boko Haram terrorists, comprising three Commanders, four Amirs, five Nakibs and others have been handed over to the Borno Government in Maiduguri, for further management after thorough profiling.

According to the DHQ, the development followed sustained onslaught on insurgents waging a blood-letting campaign against the Nigerian State.

Acting Director, Defence Media Operations (DMO), Brig-Gen. Ben Onyeuko, who made the disclosure at the bi-weekly briefing on ongoing operations across theatres, assured that the kinetic and non-kinetic approaches adopted in the prosecution of the counter-insurgency war, were yielding appreciable gains.

He sought continuous support by members of the public, in a bid to win the war and, consequently, restore order and peace to troubled areas.

Specifically, he said the operational briefing covered the period between 12 August and 2 September.

“Within the period under review, troops of Operation Hadin Kai sustained their operations to terrorists in the North East theatre,” Onyeuko said.

He disclosed that the counter insurgency efforts of the troops through kinetic and non-kinetic operations compelled the terrorists to surrender in large numbers.

His words: “Suffice to note that, within the last few weeks, more than 5,890 terrorists comprising foot soldiers and their commanders have surrendered with their families to own troops in the North East Zone

“On 14 June 2021, own troops repelled terrorists’ attack in Borno State as troops, with the support of the Air Component through air interdiction missions, inflicted heavy casualties on the terrorists and their equipment.

“No fewer than 48 of the terrorists, 20 arrested including fighters and commanders were neutralized and their logistic base and facilities including 3 gun trucks were destroyed in the process.”

While declaring that the Armed Forces of Nigeria remained steadfast in the fight against all forms of crime and criminality across the country, the DHQ further commended the sacrifice made by troops in defending the nation’s territorial integrity.