2023 Presidency: No Hand Over Agreement Between Buhari And Tinubu – Okechukwu 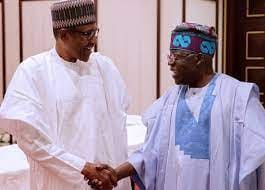 A chieftain of the ruling All Progressives Congress (APC) and Director General of Voice of Nigeria (VON), Osita Okechukwu, has said President Muhammadu Buhari did not reach any succession agreement with the party’s national leader, Ahmed Bola Tinubu.

The founder and pioneer national chairman of the defunct Congress for Progressive Change (CPC), Senator Rufai Hanga, said recently that there was “implied agreement” President Buhari would hand over power to Tinubu in 2023.

Hanga, who chaired one of the parties which collapsed to form the APC in 2014, said the agreement was the reason Tinubu remained in the APC after Buhari’s first term.

But Okechukwu told newsmen on Thursday in Abuja that there was no such agreement, adding that Buhari rarely goes into an agreement with people.

“As a member of the defunct CPC, I never heard of such an agreement and most importantly, Mr President will not want to or better put rarely enters into any formal or informal agreement with anybody. But he appreciates good deeds.

“All I know is that Asiwaju automatically could have been the Vice President if not for what lawyers will call force majeure.

“For our leadership warned against Muslim/Muslim ticket.

“Our leadership then argued that the Abiola/Kingibe Muslim/Muslim ticket which worked in 1993 may not work in 2015, if Buhari/Tinubu both Muslims were to run, as the scenario differs. That was how Asiwaju nominated Professor Yemi Osinbajo, GCON as a replacement,” Okechukwu said.

Asked to speak on the party’s decision to field a consensus presidential candidate for 2023, Okechukwu said: “First, it is refreshing that President Buhari is not for 3rd term agenda.

“Second, in my slightest imagination, one doesn’t think any committee handling such delicate matter will miss out on our national leader, Asiwaju Bola Ahmed Tinubu in the matrix.

“Methinks, he will be among the top aspirants to be considered, given his immense contribution to the success of our great party in 2015.”