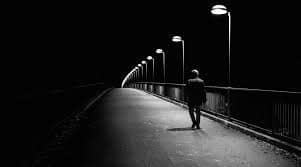 “Stay safe!” Her husband used to say. Tall Mrs. Grace, operating a restaurant along the fourth avenue, was a black woman. Every night, through the same route, she went home on foot, carrying two heavy bags. She slung one bag on her left shoulder, and the other she dragged along. She had on occasion, shared thoughts with her husband on how she could stay safe walking the street at night when she closed from work.

Tabi and Dody, street boys who peddled drugs, had taken notice of her. So, one quiet late evening, Tabi said to Dody, “why are we leaving this woman?” “It is high time we made a move on her. She is alone as usual.”

“I have thought about that many times,” replied Dody, puffing rich, thick gray smoke from his mouth. The smoke formed several rings before disappearing. And after he paused briefly, he nodded his head in support. The time on his phone showed 9:45 pm. He adjusted the hood of his dark grey jacket to cover his head and the side of his face. He examined what was left of the marijuana wrap in his fingers and took a long draw on it. Tossing the butt away, he said, “Do we give it a try now?”

Tabi took a quick glance around as he weighed the situation and their chances of overpowering and robbing the woman of her valuables. He noticed the woman was full of life and was walking rather too confidently to be cowered into a corner easily. “Not today,” Tabi replied, calculatedly. “She could prove difficult you know. We need more hands.”

The next day, about the same time, tall Mrs. Grace left the premises of her restaurant. Before she left, she called her husband to alert him of her leaving her shop to come home. This she did every day.

Tall Mrs. Grace stepped on the road. In the middle of the road, she walked with deliberate smart steps, wearing a pair of trousers that stopped below her knees. Alert, her eyes scanned dark places for suspicious movements. When she gazed towards a street corner, she caught sight of a group of four boys under the shade of a Mango tree.

Immediately, she sensed trouble and switched to a full alert mode! And tall Mrs. Grace slowed down her pace and watched the movements of the boys.

The group broke into two, and two boys went forward and the other two crossed the road and stood, talking. Tall Mrs. Grace stopped, turned around intuitively. Without giving it a second thought, she took to her heels and fled like a gazel back towards her restaurant.

The boys ran after tall Mrs. Grace. But it was clear she expected to be chased any day! She ran as if she had wings under her legs. She escaped. And how fortunate she was! The boys had knives and guns. It was obvious they would have hurt her.

Now, to recap; what must we do to stay safe walking the street at night?

Tips on How To Stay Safe Walking the Street at Night

To beef up the security around your home you might want to check out our guide on security cameras, doorbell cameras and smart security locks.